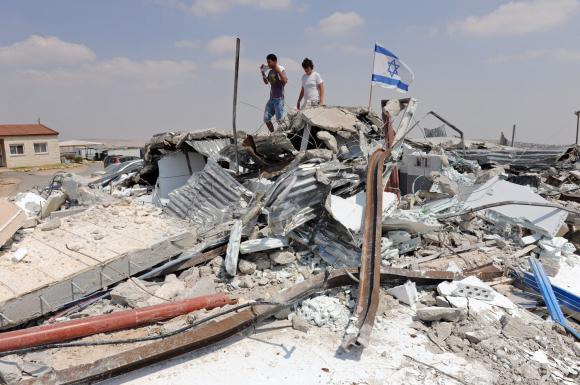 Prime Minister Benjamin Netanyahu has announced plans to create a task force to explore ways of legalizing settlement outposts built on Palestinian land, Haaretz reported.
By way of background: In February 2011, Netanyahu met with three senior Israeli ministers, the attorney-general and other top legal officials, to discuss the demolishing of illegal outposts built on private Palestinian land. The meeting was a double-edged sword, with the second objective being to discuss the possibility of legalising any constructions within settlements and outposts that have taken place on state land.

The committee subsequently submitted affidavits to the Israeli High Court of Justice, and in accordance with a court ruling in August, several buildings were destroyed in Migron, near the West Bank city of Ramallah. The illegal outpost is to be razed before the end of March 2012, and numerous other outposts are to be dismantled over the next six months.

The ruling regarding Migron and the other outposts, however, caused a backlash amongst settler groups and right-wing members of the Israeli government (including members of Netanyahuâ€™s own Likud party).

Bowing under the pressure, the prime minister contacted the minister of justice, Yaakov Neeman, instructing him to set up the task force for the purpose of legalising constructions within outposts and settlements on state land, thus faciliating the seizure of more and more Palestinian land.

Former member of the Israeli Knesset, Zehava Galon, said that Attorney-General Yehuda Weistein â€œmust make it clear to Netanyahu that the robbery and theft of private lands cannot be legalised, since it constitutes a criminal offense.â€ She also claimed that â€œNetanyahuâ€™s entire move is meant to further establish Israeli authority over the [Palestinian] territories, and deepen the occupation. â€œ