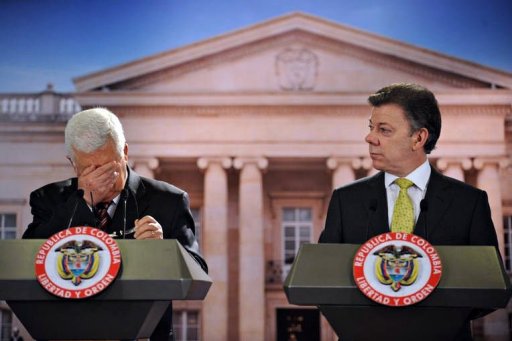 After meeting with Abbas, the Colombian president claimed that whilst they support the existence of a Palestinian state, â€œIt must be the product of negotiations [between Israelis and the Palestinians], because this is the only way to achieve peace.â€

President Santosâ€™s position is in stark contrast to that of other South American countries, notably El Salvador, the Dominican Republic and Venezuela; the latter of which received Abbas with open arms today.

Leftist President Chavez claimed that the Palestinians have gone 63 years of â€œenduring abuses, invasions, bombardments, aggression and UN resolutionsâ€ being launched against them. He continued, stating that he â€œinvites the entire Venezuelan people to support the cause of the Palestinian people.â€

Whilst support of those countries is encouraging, Colombiaâ€™s temporary position on the Security Council is crucial to the Palestinian bid.

Currently, Palestine has secured the vote of two permanent members -Russia and China- and seven of the ten non-permanent members; with Colombia, Germany and Portugal voting against Palestine.

The United Kingdom and France are likely to abstain from the vote, since neither of them can endorse UN membership of a state that they do not recognise bilaterally. This leaves only the United States, who has stated unequivocally that they will veto any bid for statehood put to a UNSC vote.

With Colombia officially declaring against Abbas, the vote now stands at nine votes for, three against, two abstentions and the US veto.

The delegation is set to meet President Sarkozy of France in Paris on Friday, to discuss their bid for UN recognition.