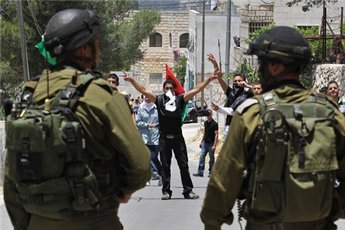 An Israeli soldier fired at a Palestinian youth, injuring him in the shoulder, in the village of Beit Ummar north of the West Bank city of Hebron, the Palestinian news agency Maâ€™an reported yesterday.Eyewitnesses reported that the Israeli soldier opened fire at the youth, Ameer Sabarneh, age 19, and shot him in the shoulder with a muffler revolver, which does not produce noise. He then beat Sabarneh until another soldier arrived on the scene, whereupon the soldiers took the youth in a military vehicle to an unknown destination.

Also in this village, clashes broke out after a strike was announced in solidarity with the striking detainees in Israeli jails, resulting in several residents suffering tear gas inhalation from grenades and gas bombs fired by the soldiers.