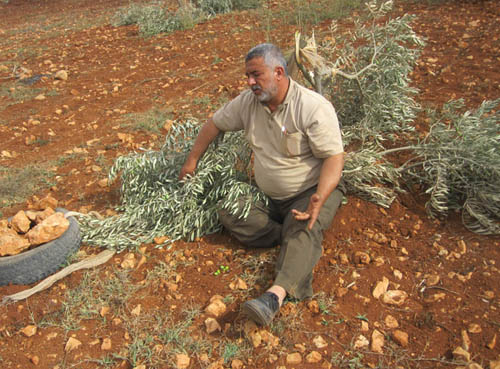 Israeli attacks within the West Bank:

Israeli forces conducted 38 incursions into Palestinian communities in the West Bank, during which they arrested 28 Palestinians, including 11 children.

On Tuesday, 11th October, at approximately 02:30, Israeli forces moved into Beit Uammar village, north of Hebron. They raided and searched a house belonging to Ahmed Khalil Abu Hashem, 46, Secretary of the Public Committee against Settlement in the town, and arrested him together with his 18-year-old son, Yousef.

That same morning Israeli soldiers, positioned at a permanent checkpoint in the centre of Hebron, attacked female Palestinian school children and teachers when they refused to be searched and scanned, simply to reach the Cordoba School in al-Shuhada Street. Israeli soldiers beat a number of schoolchildren and as a result, 7 of them sustained bruises.

Israeli forces have continued to impose severe restrictions on the movement of Palestinians throughout the West Bank, including occupied East Jerusalem, with thousands of civilians from the West Bank and the Gaza Strip continued to be denied access to Jerusalem.

Israeli forces have established checkpoints in and around Jerusalem, severely restricting Palestinian access to the city, and civilians are frequently prevented from praying in the al-Aqsa Mosque in Jerusalem.

There are approximately 585 permanent roadblocks, as well as manned and unmanned checkpoints across the West Bank.

When complete, the illegal Annexation Wall will stretch for over 700 kilometers around the West Bank, further isolating the entire population. A little over 350 kilometers of the wall have already been constructed, with almost all of the wall has located within the West Bank itself, confiscating more Palestinian land.

On 6th October 2011, â€˜Alaaâ€™ Mohammed Mahmoud Abu Madi, 26, from Khan Yunis refugee camp, died from a wound he had sustained in 2003 by an Israeli air strike.
According to PCHRâ€™s documentation, at approximately 23:45 on Tuesday, 13 May 2003, an Israeli helicopter gunship that was supporting an Israeli incursion fired a missile at a number of Palestinians who had gathered near â€˜Ebad al-Rahman Mosque, in al-Sad al-â€˜Aali area. As a result, 16 Palestinian civilians, including Abu Madi and 6 children, were hurt; Abu Madi was seriously wounded by shrapnel damage to the head and body. Since then, he had received medical treatment at various hospitals.

During the reporting period, Israeli forces repeatedly fired at Palestinian fishermen and farmers in the Gaza Strip, but no casualties were reported.

On 6th October 2011, a number of Israeli settlers from â€œYish Kodeshâ€ settlement to the south of Qasra village, southeast of Nablus, uprooted at least 210 olive and fig trees belonging to the Abu Raida and Hassan families.

On the same day, Israeli forces moved into Shuâ€™ab al-Ward area in the southwest of Beit Kahel village, northwest of Hebron. They demolished a house and a well, allegedly for a lack of license. Israeli soldiers also destroyed a number of olive trees and part of a dirt road leading to the house.

Also on the same day, Israeli troops moved into Beit Oula village, northwest of Hebron. They razed a 12-acre area of agricultural land, planted with olives and almonds, in Um al-Khanazir area near the annexation wall. At least 250 olive and almond trees were uprooted and confiscated.

Later on, several of Israeli settlers from â€œGiladâ€, east of Qalqilya, stormed Palestinian agricultural areas in Jainsafout village; they threw stones at Palestinian farmers who were cropping olives. Israeli forces arrived in the area later and dispersed the settlers.

On 9th October 2011, Israeli forces stormed Khirbat Souba area to the southwest of Ethna village, northwest of Hebron. They forced workers who were reclaiming an agricultural plot to leave the land. They also confiscated a bulldozer belonging to the contractor.

On October 10th 2011, Israeli forces moved into al-Jabâ€™a village, southwest of Bethlehem. They demolished a 120-square-meter house, which was still under-construction, claiming that it was being built without a valid permit.

On the same day, a number of Israeli settlers from â€œKarni Shomronâ€ settlement raided Palestinian agricultural areas in Jainsafout village, east of Qalqilya. They threw stones at Palestinian farmers while they were cropping olives. Israeli forces arrived at the area, removed the settlers and forced the Palestinian farmers to leave their lands.

Elsewhere, a number of Israeli settlers from â€œKarni Shomronâ€ settlement encroached on Palestinian agricultural areas in Kufor Laqef village, east of Qalqilya. They attacked Palestinian farmers while cropping olives, although Israeli forces were present in the area; the settlers damaged the tools used by the farmers. Israeli forces later took a farmer and his son to â€œArielâ€ settlement. They interrogated them, detained them until 23:30.

On 11th October 2011, Israeli forces moved into Khirbat Yarza area, east of Toubas. They demolished the mosque of the village for the second time in less than a year.

On the same day, Israeli forces demolished two house and two animal stables in a Bedouin community to the northeast of Qalqilya, claiming that they were built without licenses.

During the past week, Israeli forces have continued to harass and assault demonstrators who held protests against the construction of the annexation Wall.

Following the Friday Prayer on 7th October, dozens of Palestinian civilians with international and Israeli human rights defenders organized a demonstration in Bil’ein village, west of Ramallah. They raised the Palestinian flag, along with portraits of Marwan al-Barghouthi and Ahmed Saâ€™adat; members of the Palestinian Legislative Council who have been detained by Israeli forces. They then moved towards areas of Palestinian land, which the Israeli High Court ordered to be returned to their Palestinian owners. When they reached (Abu Lemon) nature preserve, the demonstrators walked along the wall and released the balloons and kites. They also used megaphones to call on Israeli settlers living in â€œMitityaho Mizrachâ€ settlement to leave it. Israeli soldiers stationed in the area fired rubber-coated metal bullets, stun grenades, and tear gas canisters at the demonstrators. As a result, a number of demonstrators suffered from tear gas inhalation, and fire broke out in a number of farms.

Also following the Friday Prayer on October 7th 2011, dozens of Palestinian civilians and human rights defenders organized a peaceful protest in Ne’lin village, west of Ramallah. They chanted slogans calling for Palestinian reconciliation, adherence to the Palestinian inalienable rights and resistance of the occupation. Additionally, they chanted ‘194 is the State of Palestine’ and other slogans against the American President and his speech at the United Nations, which was defending the Israeli occupation. They clashed with Israeli troops positioned near the annexation wall.

At approximately 13:00, following the Friday Prayer on 07 October 2011, dozens of Palestinian civilians and human rights defenders organized a peaceful demonstration in Beit Ummar town, north of Hebron, in solidarity with Palestinian prisoners detained in Israeli jails. They moved towards the eastern entrance of the town. The Israelis deployed their standard crowd control measures, and as a result, a British human rights defender, Emiri, 30, was hit on on his feet by two tear gas canisters, and dozens of demonstrators, including â€˜Abdul Hafiz al-Hashlamoun -a Reuters photojournalist- suffered from tear gas inhalation. Israeli forces also arrested â€˜Abdullah Ta;â€™at al-Slaibi, 25, but released him in the evening.

Due to the number and severity of Israeli human rights violations this week, the PCHR made several recommendations to the international community. Among these were a recommendation that the European Union activate Article 2 of the Euro-Israel Association Agreement, which provides that Israel must respect human rights as a precondition for economic cooperation between the EU states and Israel. PCHR further calls upon the EU states to prohibit import of goods produced in illegal Israeli settlements in the Occupied Palestinian Territories.

The PCHR calls on the international community to recognize the Gaza disengagement plan, which was implemented in September 2005, for what it is – not an end to occupation, but a compounding of the occupation and the humanitarian crisis in the Gaza Strip.