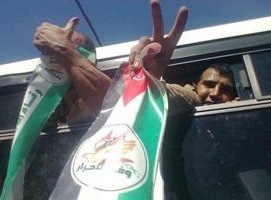 Israeli daily, Yedioth Aharonoth, quoted Israeli security officials stating that Israel will be imposing harsh restrictions on West Bank former detainees released under the prisoner-swap deal.The detainees will be required to report to the nearest military base on regular bases; being late to the set appointment means being sent back to prison to serve the remainder of the original sentence.

The Israeli Internal Security imposed these restrictions on nearly half of them, while some of these restrictions include preventing them from leaving their own towns for several years. Several others will have to report to the nearest military base at least once a month.

The Israeli paper said that should any of the released detainees be late, even for an hour, harsh measures will be taken against him, including sending them back to prison to serve the remainder of their terms; if they were sentenced to life-terms before their release, they will be arrested to serve the whole sentence.

Furthermore, some Israeli security officials stated that, in the near future, the Palestinian Security Forces will not be arresting released Hamas former prisoners who were sent back in the West Bank, and other Hamas members, in order not to be accused of collaborating with Israel.

The officials added that security cooperation between Israel and the Palestinian Authority in the West Bank has proven to be effective, and that they believe that this cooperation will be further boosted.

247 of the released detainees will be sent back to their homes in Gaza, 96 to the West Bank, 14 to Jerusalem, and 6, including one who lives in the Golan Heights, to their towns in the 1948 territories.

All 37 detainees, who were forced into exile as part of the Shalit swap deal Between Hamas and Israel, arrived in Syria, Qatar and Turkey, while the exiled female detainee, Ahlam Tamimi, was sent to Amman – Jordan.

10 detainees were sent to Turkey, 16 to Syria, 15 to Qatar while Tamimi was sent to Jordan. They were all airlifted from Cairo to the countries that agreed to host them.

In related news, U.S State Department Spokesperson, Mark Toner, said that Washington is concerned over the release of some of the detainees. He did not elaborate on the issue, but only stated that his government informed Israel of its position.