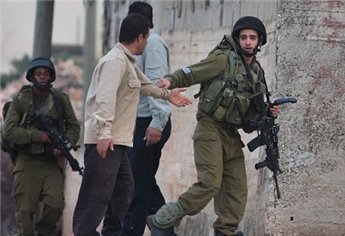 The Israeli Army detained four Palestinian residents from the southern part of the West Bank on Wednesday morning, the Maan News Agency reported.

Israeli sources have stated that those kidnapped are from the city of Bethlehem, and the villages of Beit Ummar and Yatta, near the southern West Bank city of Hebron.

Israel also claimed that the army located fifty bullets during the detention process.

Army kidnapped Khader Abu Hashem, 44, from the village of Beit Ummar, after searching his home, and confiscated three computers. He was moved to an unknown destination.

The army also searched the homes of Imad Abu Hashem and Imad Sabarneh, causing damage to the furniture.