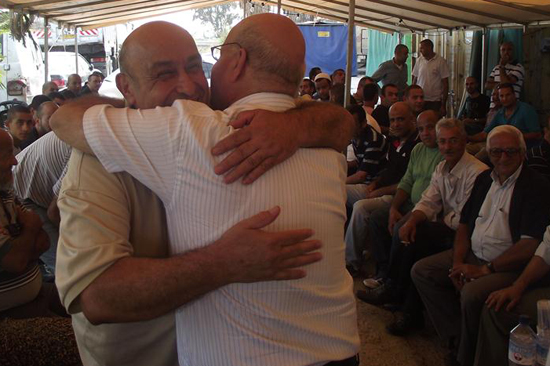 On October 18, ex-detainee, Muhammad Mansour Ziyada, expelled the correspondent of Israeli TV’s Channel One from the reception tent, which was set right next to his house in Al-Waha Al-Khadra’, in Lod city, the Arabs48 News Agency reported.
The reporter arrived at the tent for an interview with Ziyada, regarding the circumstances he faced in the process of liberation in the first phase of the prisoner-swap deal between Israel and Hamas. However, Ziyada refused to be interviewed, and expelled him from the tent.

Arabs48 website reported that at the moment the reporter reached the tent, Ziyada asked him about his identity, and the reporter responded that he is a correspondent for the Israeli’s Channel One.

Consequently, Ziyada responded with the following: “We [Palestinians] will not welcome nor make any interviews with you. We even do not accept you here in our tent for the reason that you’ve been calling us terrorists for years. How dare you think we might welcome you? You better go away from here and never ever come back.’

It was reported that the Israeli journalist remained silent and left the tent.

Ziyada was kidnapped by the Israeli army in 1987, along with his friend. They both were released in the swap, now named, “Loyalty to the Free.’