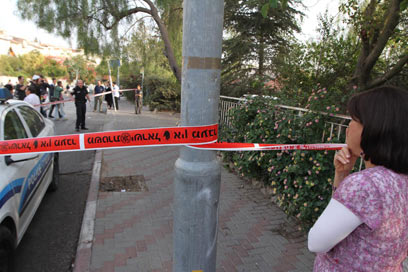 Israeli sources reported that an Israeli youth, aged seventeen, was stabbed on Saturday at around 4 P.M in Ramot, north of Jerusalem. The assailant is alleged to be an Arab-looking man, who sources say fled towards Beit Iksa town, in East Jerusalem.The Israeli daily, Haaretz, reported that the army searched the village and the surrounding areas.

The Israeli teenager, Yehuda Ne’emad, was sitting with a friend when the man passed by. He then approached the two teens with a knife, and stabbed the youth in the back and stomach. Ne’emad was quickly taken to the Hadassah University Hospital – Ein Karem, in Jerusalem, while his health condition was described as stable, and he is expected to make a full recovery.

The Israeli Police said that their strongest lead is that the attack carried “nationalist motives”, but gave no reason nor presented any evidence which led them to draw that conclusion. The attacker gave no reason or even spoke, no group claimed responsibility, and the motive may have been criminal and not political.