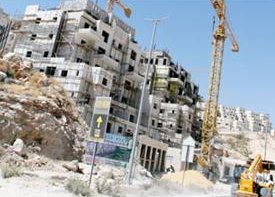 The Israeli “Construction and Planning Committee” approved the first stage of construction before the Sukkot Jewish feast earlier this month. Approximately 2,610 units are planned to be built in the first stage.

The Committee, in coordination with the Housing Ministry, will be holding a meeting on December 8th to approve the second stage that is considered the largest construction project since Israeli built the illegal Har Homa (Gabal Abu Ghneim) settlement in the nineties.

The paper added that the implementation of the new project in the southern part of Jerusalem will help complete the “Jerusalem Belt”, by completely surrounding the city with settlements and creating a link between Gilo settlement and Har Homa; a development that will eventually seal the southern entrance of Jerusalem.

According to an editorial by Israeli daily, Haaretz, about one-third of the new constructions will be built as an expansion to the Palestinian town of Beit Safafa.

The editorial adds that despite the fact that this time the plan includes an expansion of a Palestinian area, the construction will reduce the chances of reaching a peace agreement over Jerusalem allowing contiguity between the Palestinian areas.

The new plan comes in a time when international efforts to resume the deadlocked peace talks between Israel and the Palestinian Authority remain fruitless, due to Israel’s ongoing plans to construct and expand its settlements, dubbed illegal by the International Law.

Israel’s settlement activities were among the reasons that pushed the Palestinian Authority (P.A) in the West Bank to quit direct talks with Israel last year.