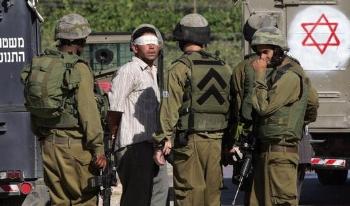 The Palestine News & Info Agency (WAFA) reported Tuesday that the Israeli military kidnapped ten Palestinian citizens in different parts of the occupied West Bank.The army broke into the house of Khaled Al-Hagagreh, 41, in Um Salamoneh village, near the West bank city of Bethlehem.

He was taken prisoner after the army broke into his home and violently searched it, local sources have reported.

Furthermore, Palestinian security sources stated that the army also invaded the Sa’ir town, near the southern West Bank city of Hebron, and kidnapped a resident identified as Haitham Shalada, 27, before talking him to an unconfirmed location.