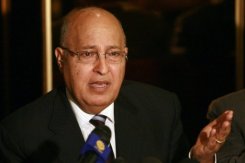 The International Quartet for Mideast Peace, made up of representatives from the US, EU, Russia and Great Britain, held separate meetings on Wednesday with Palestinian and Israeli officials in an attempt to re-start peace talks, which have been stalled for over a year since Israeli government officials refused to end expansion of Israeli settlement colonies on Palestinian land.The international Quartet met with Palestinian and Israeli officials at the UN headquarters in Jerusalem Wednesday, to try to renew the negotiations about the peace process. However, Palestinian officials say they feel that no benefit would come out of returning to the negotiating table at this point. Several officials expressed their concern about the failure of past negotiations, and the ongoing Israeli violations of past signed agreements.

Palestinian negotiator Nabil Shaath reported to Voice of Palestine Radio that the Quartet does not have a new strategy for negotiations. Accordingly, he expressed his belief that the meetings might not result in positive results.

He stated, ‘We [Palestinians] have to guarantee the ending of the Israeli occupation of the Palestinian Territories, which were captured in the Six-Day War in 1967, along with Jerusalem, before returning to the negotiations.’