Child Suffers Quadriplegia After Being Shot In The Neck 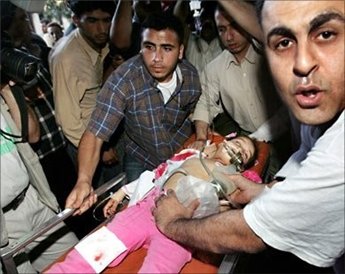 Head of the neurological department at the Al Maqassed Hospital, in East Jerusalem, Prof. Sami Hussein, stated that surgeons operated on Aseel Ara’ra, 4, following a gunshot injury to the neck, and that she is currently at the Intensive Care Unit. He added that Aseel’s injury caused Quadriplegia. Hussein stated that the bullet entered her neck on the left side smashing the fourth vertebrae of her spine before exiting from the her right shoulder.

Her family said that she was shot by Israeli soldiers during training at a nearby military base.

Palestinian medical sources in occupied Jerusalem reported that a 4-year-old child, was shot by a stray live round in her neck fired by Israeli soldiers during training at the Anatot military base, built on lands illegally annexed from the residents Anata Palestinian town, north of Jerusalem. The child suffered quadriplegia.

The child, Aseel Ara’ra, 4, was moved to the Al Maqassed Hospital, in East Jerusalem and is currently in a serious condition, the Maan News Agency, reported.

The bullet entered the left side of her neck and exited on the right causing quadriplegia, Maan added.

Her family said that the Israeli Army must take responsibility for the attack, and must conduct an investigation to prosecute those responsible for the shooting.

The family lives next to the military base in question, while the Israeli Army denied any relation to the attack.

The Ara’ra family is from a Bedouin tribe that resides in the Anata area, close to the Israeli camp. The area is under full Israeli control.