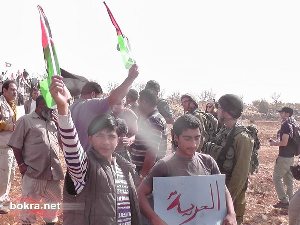 Israeli soldiers attacked on Saturday a nonviolent protest against Israeli settlements, in Beit Ummar town, near the central West Bank city of Hebron, five reporters and one resident were injured.The procession started from the center of the town and headed towards Khallit Al Katla area, largely threatened by the expansion of Karmie Tzur settlement, south of Beit Ummar.

Dozens of locals accompanied by Israeli and international peace activist participated in the procession.

The protesters carried Palestinian flags and chanted slogans calling for ending the closure imposed on the town, ending Israel’s violations in the occupied territories, and chanted for national unity.

The army declared the protest area as a closed military zone, while armed Israeli settlers accompanied the soldiers. Troops then fired gas bombs and concussion grenades at the protesters, and assaulted several journalists.

Furthermore, settlers hurled stones at the protesters and shouted insults at them while the soldiers did not attempt to stop them, local sources reported.

AFP cameraman, Hazem Bader, was hit in the head by a stone hurled by one of the settlers and was moved to a local hospital.