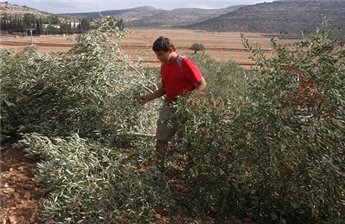 Dozens of Israeli settlers attacked, on Saturday morning, Palestinian farmers in the village of ‘Azmout, near the West Bank city of Nablus, preventing them from harvesting their olive trees, the Maan News Agency reported.Ghassan Douglas, Palestinian liaison official in charge of Israeli settlements activities at the Palestinian National Authority, in the northern part of the West Bank, stated that dozens of settlers attacked the Palestinian farmers near the illegal settlement of Elon Moreh, and prevented them from harvesting their trees.

The attack resulted in confrontation between the settlers and the local villagers; no injuries were reported.

The village of ‘Azmout is subject to ongoing Israeli settlers’ attacks, who in many cases assaulted Palestinian farmers, bulldozed farmlands and uprooted trees.

In several cases, the settlers harvested Palestinian trees, and stole the produce.