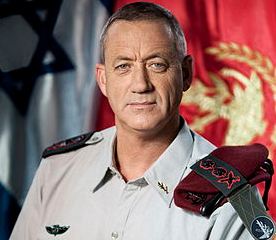 Israeli Army Chief of Staff, Benny (Benjamin) Gantz, ordered the army to start what he called “gradual retaliation” to counter the shells fired from the Gaza Strip into adjacent Israeli areas, Israeli TV reported.Gantz stated that Israel will not be committed to a truce with the resistance groups in the Gaza Strip, and will continue to strike Gaza to limit the capabilities of the resistance.

The Jerusalem Post reported on its website on Monday night, that the army must always be ready for a sudden deterioration and escalation in the region, and that Israel must always ensure the safety and security of the country and its citizens.

The Jerusalem Post added that he was talking to Israel Army Operational Commanders, ranking a Battalion Commander (lieutenant colonel) and up, and stated that Israel “should not be taking big risks amidst the current instability in the region.”

It is worth mentioning that heads of city councils in Beersheba (Be’er Al Sabe’), Ashdod and Ashkelon (Asqalan), decided to keep all of the schools closed on Tuesday, amidst the ongoing firing of homemade shells and mortars into the country.

Meanwhile, the Abu Ali Mustafa Brigades, the armed wing of the Popular Front for the Liberation of Palestine (PFLP), stated that its fighters fired three mortars into Israeli areas adjacent to the Gaza Strip. Six mortars and shells were fired from the Gaza Strip on Monday.

Israeli sources reported that a Grad Katyusha missile was fired from Gaza into Beersheba on Monday, and that a homemade shell was fired into Sderot in the Negev. No injuries or damages were reported.

Twelve Palestinians were killed by Israeli missiles and shells fired by the army into the Gaza Strip since Saturday. Nine of them were fighters of the Al Quds Brigades, the armed wing of the Islamic Jihad.