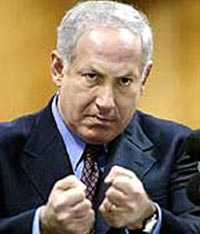 After the UNESCO voted Monday to allow Palestine to become a full member, Israeli Prime Minister, Benjamin Netanyahu, decided to convene with his “cabinet of eight” on Tuesday to discuss a series of sanction against the Palestinian Authority in the West Bank.Israeli online daily, Haaretz, quoted a senior cabinet members stating that it remains unclear what type of sanctions will Israel be imposing on the P.A, yet several proposals were submitted.

The proposed sanctions include the voiding the VIP status of senior Palestinian Authority officials (VIP allows them to pass Israeli roadblocks and crossings) stopping all transfer of tax money Israeli collects on behalf of the P.A, and increasing Israel’s settlement construction and expansion activities.

The delegates of UNESCO voted overwhelmingly to include Palestine as a member, with a vote of 107 – 14, with 52 abstentions. When the vote was counted, a huge cheer went up through the Assembly room.

‘Joy fills my heart. This is really an historic moment,’ said Palestinian Foreign Minister Riad Malki. ‘We hope that today’s victory at UNESCO marks but a beginning. Our admission to UNESCO is not an alternative, is no substitute for something else.’ The United States, Canada and Germany voted against Palestinian membership. Brazil, Russia, China, India, South Africa and France voted in favor. Britain abstained.

In response to the vote, the United States decided to cut all funding to the UNESCO and to rethink all cooperation with the organization.

U.S State Department spokeswoman, Victoria Noland, stated that the Congress
restricts funding to United Nations institutions that recognize Palestine as a state before a final peace agreement is reached between Israel and the Palestinians.

On September 23, Palestinian President, Mahmoud Abbas, delivered a historic speech at the United Nations before submitting the official application for full UN membership.

The Palestinians had to quit talks with Israel due to its ongoing violations, invasions and the ongoing construction and expansion of settlements in the occupied territories, especially in occupied East Jerusalem.