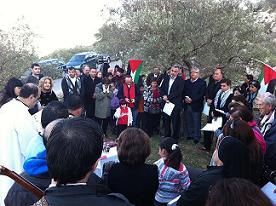 As part of the weekly nonviolent protests against the occupation, settlements, the Wall, and the illegal Israeli attempts to annex lands that belong to the Cremisan Christian Monastery In Beit Jala, Palestinian Christians held prayers on lands that belong to residents of the town, located near the West Bank city of Bethlehem.The Palestine News Network (PNN) reported that the Latin Church in the city has been holding these prayers on the lands in question since several weeks.

The ceremony was headed by Father Ibrahim Ash-Shomaly of the Latin Church in Beit Jala, who affirmed that these prayers come while the world readies for Christmas, while the Christians and the Muslims in Bethlehem, Beit Jala and Beit Sahour, and the entire Palestinian population, are asking the International Community to intervene and stop the injustice inflicted upon them.

Father Shomaly added that the prayers are also a message to the entire world informing them that what Israel is doing is a direct violation to all international treaties, and a violation to the principles of all religions.

He further stated that the world must practice pressure on Israel to oblige it to stop its assaults and violations, and called on the owners of the threatened and confiscated lands “to keep their faith as injustice cannot prevail in the Holy Land”.
The father added that “the teachings of Jesus teaches us that justice will prevail”, adding that the “injustice and land theft that is taking place in Beit Jala will end.”

Several residents who attended the ceremony carried posters that read “No Peace Without Justice”, “Injustice Cannot Last Forever”, and confirmed that they will continue their weekly nonviolent protests to resist the Israeli bulldozers, and to send a message to the entire world telling them that Israel is practicing injustice in the Holy Land.