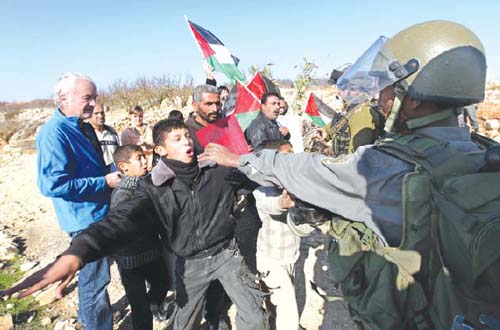 In its Weekly Report on Israeli Human Rights Violations in the Occupied Palestinian Territories for the week of 24- 30 Nov. 2011, the Palestinian Center for Human Rights found that two Palestinians were wounded when Israeli forces attacked peaceful protests in the West Bank. Troops also abducted 9 Palestinians in the West Bank.In addition, Israeli war planes launched a number of air strikes against targets in the Gaza Strip. A greenhouse and a training site were bombarded. The Israeli Navy has continued to attack Palestinian fishermen in the Gaza Strip, this week abducting 14 Palestinian fishermen and confiscating a number of fishing boats.

Israeli forces raided offices of a car rental company in Nablus and confiscated money and documents. On November 24th at approximately 03:00, Israeli forces moved into Rafidya neighborhood in the west of Nablus. They raided offices of Fattouh Car Rental Company in an-Najah University Street. They destroyed the cameras and the alarm system. They then confiscated two hard disks, a number of cheques, some money, car licenses and ownership documents belonging to the owner, Wa’el ‘Ata Abu Shaqdam.

At least 65% of the main roads that lead to 18 Palestinian communities in the West Bank are closed or fully controlled by Israeli forces.

On 27 November 2011, Israeli warplanes bombarded a training site of the Palestinian resistance in Nussairat refugee camp in the central Gaza Strip. The site and the fence of a nearby plot were damaged.

On the same day, Israeli warplanes bombarded a greenhouse in the southern Gaza Strip town of Khan Yunis, damaging it.

Israel has continued to impose a total closure and has isolated the Gaza Strip from the outside world. Israel has closed all border crossings to the Gaza Strip for over three years. The illegal Israeli-imposed closure of the Gaza Strip, which has steadily tightened since June 2007, has had a disastrous impact on the humanitarian and economic situation in the Gaza Strip.

On 24 November 2011, Israeli forces, accompanied by a bulldozer, moved into Wadi al-Bas area in Ethna village, west of Hebron. They demolished 3 water wells and 3 agricultural rooms, claiming that they were established without licenses. The demolished facilities were located 450-500 meters away from the annexation wall. Israeli forces then demolished a 70-square-meter, under-construction house, nearly 700 meters away from the annexation wall.

On the same day, Israeli forces moved into Khirbat al-Mafqara area to the southeast of Yatta village, south of Hebron. They surrounded a mosque in the area and a subordinate room, which includes an electricity generator. They took out the contents of the mosque and demolished it. They also destroyed the electricity generator. Israeli forces then demolished a house belonging to Mahmoud Hussein Hamamda, in which 21 individuals live, after vacating it. They also demolished a part of a nearby cave used by the family as a store. During the evacuation of the house, the owner’s daughter protested the evacuation of the family’s furniture, so an Israeli soldier beat her and another one sprayed gas on her face. When her mother intervened to protect her, Israeli soldiers pushed her down. She sustained a fracture to the left foot. Israeli forces abducted two girls, claiming that “they obstructed the work of security officers and threw stones at them.”

Israeli forces then moved to the nearby Khirbat Sousia area and demolished a tent and an animal farm.

On 26 November 2011, a number of Israeli settlers from “Karni Shomron” settlement near Qalqilya-Nablus road threw stones at Palestinian civilian vehicles traveling on the road. As a result, a car was damaged.

Also on 26 November 2011, Israeli forces moved into ‘Azzoun ‘Atma village, southeast of Qaqlilya. They demolished a room and a water tank belonging to Fahima ‘Abdul Karim al-Sheikh, for the purpose of the construction of a part of the annexation wall.

On 29 November 2011, Israeli forces handed a notice to a Palestinian civilians in Sourif village, north of Hebron, ordering seizure of a 12-dunum area of agricultural land, located nearly 5 kilometers away from the annexation wall. Israeli forces gave the owners 45 days to destroy the water well and uproot the trees on the land; otherwise, Israeli forces would destroy the land themselves.

In the West Bank, during the reporting period, Israeli forces used excessive force to disperse peaceful demonstrations organized in protest to Israeli settlement activities and the construction of the annexation wall in the West Bank. As a result, two Palestinian civilians were wounded – a 23-year old hit by a rubber-coated metal bullet to the head, and a 61-year old hit in the leg by a high velocity tear gas canister. Dozens of Palestinian civilians and international human rights defenders suffered from tear gas inhalation.

Following the Friday Prayer on 25 November 2011, dozens of Palestinian civilians and international and Israeli human rights defenders organized a peaceful demonstration in Bil’ein village, west of Ramallah, in protest to the construction of the annexation wall. They raised the Palestinian flag and called for ending political division. They then moved towards areas of Palestinian land, which the Israeli High Court ordered to be returned to their Palestinian owners. Israeli soldiers stationed in the area fired rubber-coated metal bullets, sound bombs and tear gas canisters at the demonstrators. As a result, a number of demonstrators suffered from tear gas inhalation.

Also following the Friday Prayer on 25 November 2011, dozens of Palestinian civilians and international and human rights defenders organized a peaceful demonstration in Ne’lin village, west of Ramallah, in protest against the construction of the annexation wall. They chanted slogans calling for Palestinian reconciliation, adherence to the Palestinian inalienable rights and resistance of the occupation. Additionally, they chanted ‘194 is the State of Palestine’ and other slogans against the American President and his speech at the United Nations that was defended the Israeli occupation. They clashed with Israeli troops positioned near the annexation wall. Israeli soldiers fired rubber-coated metal bullets, sound bombs and tear gas canisters at demonstrators. As a result, a number of demonstrators suffered from tear gas inhalation.

Also following the Friday Prayer on 25 November 2011, dozens of Palestinian civilians and international and Israeli human rights defenders organized a peaceful demonstration in Nabi Saleh village, northwest of Ramallah, in protest against land confiscations and settlement activities. They raised the Palestinian flag, chanted slogans calling for ending the occupation. When the demonstrators attempted to reach areas of land seized by Israeli settlers near ‘Halmish’ settlement, Israeli soldiers fired rubber-coated metal bullets, sound bombs and tear gas canisters at them. As a result, two Palestinian civilians were wounded: Mohammed Moneer Tamimi, 23, wounded by a rubber-coated metal bullet to the head; and ‘Atallah Tamim Tamimi, 61, hit by a tear gas canister to the right foot.

Also following the Friday Prayer at approximately 12:20, dozens of Palestinian civilians and international human rights defenders organized a peaceful demonstration in the center of Kufor Qaddoum village, northeast of Qalqilya, in protest to continued closure of the eastern entrance of the village. They moved towards the entrance, but Israeli forces stopped them. Israeli soldiers fired tear gas canisters and sound bombs at the demonstrators. As a result, a number of demonstrators suffered from tear gas inhalation.

Due to the number and severity of Israeli human rights violations this week, the PCHR made several recommendations to the international community. Among these were a recommendation that, in recognition of the International Committee of the Red Cross, as the guardian of the Fourth Geneva Convention, the PCHR called upon the ICRC to increase its staff and activities in the Occupied Palestinian Territories, including the facilitation of family visitations to Palestinian prisoners in Israeli jails.

The PCHR also noted that the organization appreciates the efforts of international civil society, including human rights organizations, bar associations, unions and NGOs, and urged them to continue their role in pressuring their governments to secure Israel’s respect for human rights in the Occupied Palestinian Territories and to demand Israel end its attacks on Palestinian civilians.