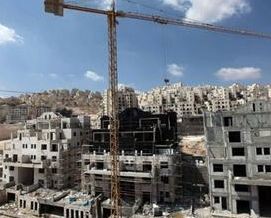 At the Jerusalem Municipality, the Israeli Regional Construction and Planning Committee has approved a plan to construct 650 housing units in the settlement of Pisgat Ze’ev. The settlement, first constructed in 1985, is built on land belonging to the residents of the villages of Beit Hanina and Hizma, north of Jerusalem. Khalil At-Tafakji, a Palestinian expert in maps and settlements, reported that the plan was officially approved and that the construction project was published in Israeli papers under project #11647, for appeal purposes.

Tafakji stated that these units are part of a larger plan that aims at constructing 58,000 units by the year 2030, after the deadline was originally 2020.

He said that the plan also includes malls, public facilities and institutions, in addition to hundreds of apartments and homes for the settlers.

It is worth mentioning that the originally approved Industrial Zone was voided, while the 300 Dunams (74.13 Acres) of Palestinian lands in Hizma and Beit Hanina that were allocated for the Industrial Zone will be used for the construction of hundreds of residential units.

The lands in question will be used for the benefit of the illegal Pisgat Ze’ev settlement, close to the Hizma military roadblock.

Tafakji said that Israel is going on with the work on Road #20, an issue that is leading to more confiscation of lands that belong to the Palestinian residents of Beit Hanina; the road is planned to be completed within six months.

As part of the construction of Road #20, Israel built two sections of the bridge that will be used as a link between Pisgat Ze’ev settlement, and settlement road #443 (Modi’in-Tel Aviv).

Road #20 divides Beit Hanina into two parts and illegally grabs large areas of Palestinian lands. The road is meant to allow the settlers faster access to and from the settlements.

Settlements are illegal under International Law and the Fourth Geneva Convention, which Israel is a Signatory to.