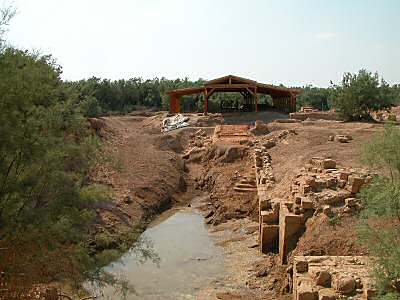 Extremist right-wing Israeli settlers broke into a closed-off military zone in between the West Bank and the Jordanian border, at the site thought to be where Jesus was baptized.On Monday, right-wing Israeli protesters barricaded themselves buildings at the site of the baptism of Jesus at the Jordan River, which is a holy site for Christians around the world.

They hung banners with photos of the right-wing Jewish leader Ze’ev Jabotinsky, who called for the ‘Jewish state to expand beyond the Jordan River into the state of Jordan and all the way to Iraq.”

The protesters say they are sending a message to the Jordanian government to stay out of Israeli affairs. This is a reference to the statement made by Jordan’s King Abdullah Monday that he hoped Israel would choose not to demolish a bridge in Jerusalem.

The bridge in question is a historic structure that leads to the al-Aqsa mosque, which is the third holiest site in the world for Muslims. Israeli authorities closed the bridge on Friday, sparking outrage among Muslims around the world.

The attack occurred at the Jordan River, on a closed military zone separating the West Bank and the Jordanian border, and both Jordanian Authorities and the Israeli Army have stated that the Israelis did not cross the border, but were approximately only a few hundred metres away.

Those protesters in question were from a group known as the ‘Hilltop Youth’, numbered around thirty, and were quickly removed from the area by the Israeli army and police.

In a separate incident, around fifty Settlers invaded the Efraim Regional Brigades military barracks near Qalqilia, setting several fires, throwing molotov cocktails and stones, which led to damage to buildings and vehicles.

Over a hundred settlers also attacked the Brigade Commanders car, and threw stones at passing Palestinian cars, on the main road near the settlement of Ramat Gilad.

The string of attacks comes as tension mounts over the impending dismantlement of numerous illegal outposts within the West Bank by the Israeli authorities.