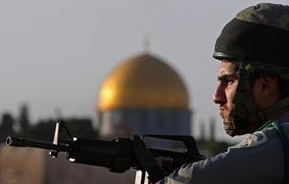 An official at the Israeli run Jerusalem City Council called for closing the al-Aqsa Mosque for all Muslim worshipers in an attempt to pressure Muslims into accepting the demolishing of the bridge of the historic al-Magharba Gate that leads to the mosque.Member of the Jerusalem City Council’s Planning and Construction Committee, Sasson Gabai, stated that “all entrances leading to the al-Aqsa Mosque must be closed to Muslim worshipers until the Islamic Waqf Department agrees to the demolishing of the bridge”.

Israel claims that the bridge is unsafe, and that its wants to demolish it in order to rebuild it in a safe way, but part of the plan is to widen it so it can fit police vehicles that would be sent to the scene in case of protests in the area, Palestinian sources reported.

Gabai stated that he intends to collect signatures from all members of the Jerusalem City Council approving the closure of the mosque to all Muslim worshipers before he sends the signed document to the Interior Minister for final approval.

He demanded that the Minister “use his authority to prevent discrimination against the Jews”..

Meanwhile, The Higher Islamic Committee slammed the calls to close the al-Aqsa Mosque, and to prevent the Muslims worshipers from reaching it, and considered them as a direct violation to the Freedom of Worship.

The Committee described the calls as an attempt to pressure the Waqf Ministry into agreeing to the destruction of the historic bridge.

It also stated that the area in question is an Islamic Waqf property, and that only the Islamic Ministry of Waqf and Religious Endowment has the right to supervise the area, and make any needed restoration.

The Ministry also held the Israeli government responsible for the partial collapse that happened in the al-Magharba Hill, south west of Jerusalem, due to the ongoing Israeli excavations in the area.