Settlers Torch A Mosque In Ramallah 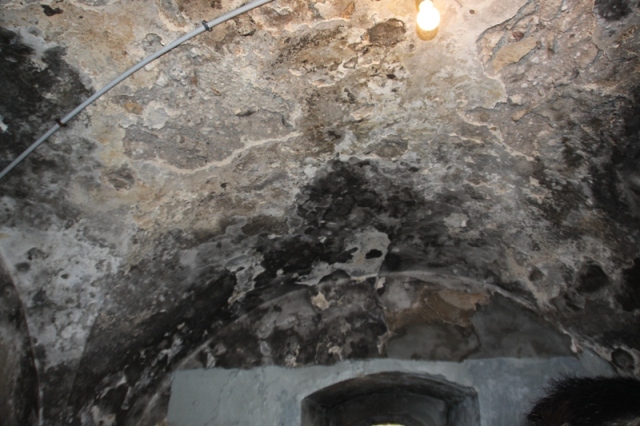 A group of fanatic Israeli settlers burnt, on Thursday at dawn, a mosque in Borqa village, east of the central West Bank city of Ramallah, and wrote racist graffiti on its walls. The incident is the latest of a series of attacks against Palestinian mosques and property.
According to eyewitness accounts, the settlers burnt the first and second floors of the mosque, after writing offensive graffiti regarding Arabs, Palestinians and Islam.

A resident of Borqa village told the Arabs48 News Website that a group of fanatical armed settlers invaded the village at dawn, and burnt the mosque, causing considerable damage.

The attack comes one day after a similar arson –attempt targeted Okasha historic mosque in Jerusalem. Before setting parts of the mosque ablaze, the settlers spray-painted racist graffiti targeting the Palestinians and the Muslim prophet.

Several mosques were attacked and burnt over the last few months in the occupied West Bank, in addition to an arson attack in Tuba-Zangaria, in the Galilee, in which the settlers destroyed the town mosque, and wrote ‘price tag’ graffiti in Hebrew.

On Wednesday, the settlers burnt four Palestinian cars in Nablus and Salfit districts.

Israeli media have reported that the settlers engaging in the price tag campaign no longer fear repercussions from the Israeli police for their attacks on Palestinian mosques and other holy sites.

The Price Tag attacks are carried out against the Palestinians, their property and holy sites, and against peace groups and leftist figures in Israel.

The settlers hold the Palestinians and Israeli peace groups responsible for the evacuation of illegal outposts in the West Bank.

Earlier on Thursday, the Israeli army dismantled two structures in the illegal Mitzpeh Yitzhar settlement in the West Bank.

In related news, Israeli troops closed the Huwwara and Za’tara roadblocks on Thursday morning, near the northern West Bank city of Nablus, under the pretext of preventing settler attacks against Palestinian vehicles in the area.