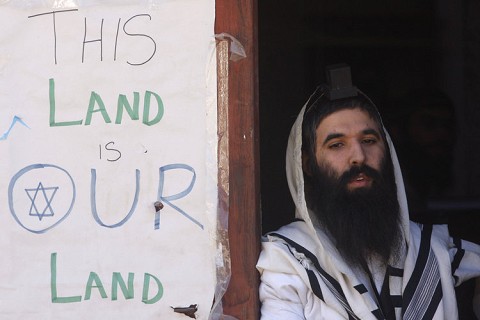 On Wednesday, Israeli right-wing settler youth continued attacking property and holy sites for the third straight day, while Israeli Defence Minister Ehud Barak told the Army Radio that he considered the recent attacks to be the work of “Jewish terrorists”.In the clashes on Wednesday, Israeli police attempted to arrest several right-wing Israeli youth in Jerusalem for questioning about last night’s mosque burning, and the youth responded by slashing tires and vandalizing police cars.

According to local sources, the police arrived at an apartment known to house a number of right-wing Israeli settlers, who had been kicked out of the settlement of Yitzhar for their incitement of violent clashes there. When the police pulled up, dozens of other right-wing settlers gathered around to block entry to the apartment, and began clashing with the police.

The police managed to enter the apartment, and take in six individuals for questioning – both regarding the case of the mosque arson in Jerusalem on Tuesday night, and about the attack on an Israeli military base on Monday night.

In response to the recent surge in settler violence, numerous politicians and analysts have called for an end to inflammatory legislature, policies and practices by the Israeli government, which include normalizing Israeli settlements in the West Bank – all of which are considered illegal under international law.

Palestinian-Israeli legislator Talab al-Sana said during a visit to the burned mosque on Wednesday, ‘The settlements have become incubators for criminals.”

Israeli commentator Yossi Sarid wrote in a column in the paper Ha’aretz on Wednesday, stating that the Israeli leadership should not be surprised at the increase in right-wing violence, since they themselves had fanned the flames on anti-Arab hatred, adding, “He who demands silencing the muezzin should not fake surprise when a mosque is burned. He who pardoned the first Jewish-underground murderers and the Shin-Bet Bus-300 murderers should not shudder when he meets those murderers’ successors on the hills.”