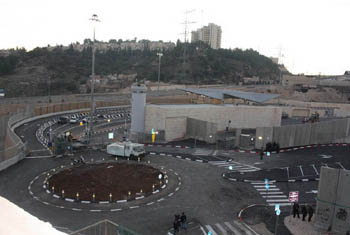 In its Weekly Report On Israeli Human Rights Violations in the Occupied Palestinian Territories for the week of 08- 14 December 2011, 4 Palestinians (two resistance fighters and a man and his child) were killed by Israeli air strikes in the Gaza Strip, and one peaceful protester was killed in the West Bank.21 Palestinian civilians, including 8 children and 5 women, were wounded by Israeli forces in the Gaza Strip. Israeli forces have continued to use force against peaceful protests in the West Bank. A Palestinian civilian was killed and 5 others, including two children, were wounded.

In the Gaza Strip, Israeli forces killed 4 Palestinians, including a child, this week.

On 08 December 2011, Israeli forces extra-judicially executed two Palestinian resistance fighters in the center of Gaza City. An Israeli warplane fired a missile at the car in which the fighters were traveling. Additionally, 4 civilian bystanders, including a woman, were wounded.

On 09 December 2011, a Palestinian civilian and his child were killed and 11 others were wounded, when Israeli warplanes bombarded a training site of the ‘Izziddin al-Qassam Brigades (the armed wing of Hamas) in the west of al-Nasser neighborhood in the north of Gaza City. As a result of the attack, two neighboring houses were destroyed over their residents. Five members of the victims’ family (3 children and two women) were among the wounded.

On 09 and 10 December 2011, Israeli warplanes bombarded space areas in the west of the southern Gaza Strip town of Rafah, but no casualties were reported.

On 11 December 2011, 3 Palestinian civilians, including two children, were wounded when Israeli warplanes bombarded a house belonging to a Palestinian resistance fighter in al-Zaytoun neighborhood in the east of Gaza City.

On 13 December 2011, two Palestinian civilians, including a child, were wounded by Israeli soldiers stationed at the border between the Gaza Strip and Israel in the northern and central Gaza Strip.

On 14 December 2011, a Palestinian civilian was wounded by Israeli soldiers stationed at the border between the Gaza Strip and Israel to the east of Gaza City.

In the West Bank, during the reporting period, Israeli forces used excessive force to disperse peaceful demonstrations organized in protest to Israeli settlement activities and the construction of the annexation wall in the West Bank. As a result, a Palestinian civilian was killed in Nabi Saleh village, northwest of Ramallah, and 4 others, including two children, were wounded. Dozens of Palestinian civilians and international human rights defenders suffered from tear gas inhalation.

Israeli forces conducted 44 incursions into Palestinian communities in the West Bank, during which they
abducted 26 Palestinians, including 5 children. The detainees include Dr. Ayman Daraghma, Member of the Palestinian Legislative Council.

Israeli forces demolished a house and a barbershop in Beit Hanina village.

Israel has continued its settlement activities in the OPT in violation of international humanitarian law, and Israeli settlers have continued to attack Palestinian civilians and property.

On 14 December 2011, a Jewish group set fire to Nabi Ukasha Mosque, which is controlled by some extremist settlers, in West Jerusalem. They also wrote statement insulting Prophet Mohammed. Baroch Marzil, an extremist Jew, claimed responsibility for burning the mosque, allegedly in response to incitement against settlers. Israeli forces have prevented Palestinians from praying in the mosque, but have allowed settlers to establish a playground for their children on its yard.

On 08 December 2011, Israeli forces notified Palestinian civilians in al-Khader village, south of Bethlehem, of the confiscation of 150 dunums agricultural land belonging to the families of Salah and Handal, located near “Daniel” settlement. In the same context, Israeli forces handed a notice ordering the demolition of an agricultural barrack in al-‘Absiya area near “Eli’azer” settlement.

On 12 December 2011, more than 100 Israeli settlers from ‘Yizhar’ settlement which is established on Palestinian lands in the east of Southern Assira village, south of Nablus, attacked Palestinian houses in Southern Assira village. The majority of settlers were wearing black clothes and a number of them were wearing green clothes. As they approached Palestinian houses, which are approximately 350 meters from ‘Yizhar’ settlement, they threw stones and empty bottles at houses. Palestinian residents, especially children and women, were in intimidated and panicked as a result of the attack. There are 62 people, including 46 children and 7 women, living in the targeted houses. As a result of the said attack, the windows of seven of the targeted houses were smashed. Similarly, the windows of a taxi that was parked in front of one of the targeted houses were smashed. Thirty minutes later, Israeli forces military jeeps arrived at the scene and the Israeli settlers withdrew. Israeli forces have not taken any measures against the settlers who launched the attack.

On the same day, a group of Israeli settlers also from ‘Yitzhar’ settlement threw Molotov cocktails at the house of Jamal Abdullah Yousef Shehada in ‘Ourif village, southeast of Nablus. One of the windows in the southern walls of the house was set alight and smashed as a result. Seven individuals, including 5 children, live in Shehada’s house, which is located approximately one kilometer from ‘Yitzhar’ settlement.

On the same day, a number of Israeli settlers attacked a car belonging to Mahmoud Majed Rayan, 28, from Qarawat Bani Hassan village northwest of Salfit, when he was traveling on Qalqilya-Nablus road near “Karni Shomron” settlement. Rayan was traveling in the car together with his wife, child and father-in-law. Israeli settlers threw stones at the car near Kufor Laqef village. The front window of the car was broken and Rayan’s father-in-law was injured. His wife also fainted as she was extremely afraid.

On the same day, Israeli settlers attacked a car belonging to ‘Ouda Suleiman al-Ramadin, 37, from al-Ramadin village south of Qalqilya, when he was traveling on Qalqilya-Nablus road near “Karni Shomron” settlement. Al-Ramadi was traveling in the car together with his friend, ‘Ouda Salman. Israeli settlers threw stones at the car near Kufor Laqef village. Al-Ramadin was hit by a stone to the left elbow, and the front window of the car was completely broken.

On 14 December 2011, a number of Israeli settlers burnt a Palestinian civilian vehicle (Red Opel Ascona) that was parked at Hares intersection, north of Salfit. The owner of the vehicle, Ahmed ‘Abdul ‘Aziz ‘Obaid, 28, who works in a factory in “Burkan” settlement, northwest of Salfit, had always parked it in this place. According to ‘Obaid, the settlers wrote on the wall near the vehicle: “You will pay the price.” Israeli forces have an observation tower nearly 200 meters away from the place of the attack, which suggests that they witnessed the attack, but did not stop it.

At the same time, Israeli settlers set fire to a car belonging to Mohammed Ibrahim Musleh, 45, from Yassouf village east of Salfit, which he parked near his house. The car was partially burnt as Musleh was able to extinguish fire. Later, he found a statement written in Hebrew on the wall of his house, which says: “You will pay the price.”

At approximately 02:15 on the same day, a number of Israeli settlers set fire to two cars belonging to ‘Abdul Razzaq and Mohammed ‘Abdullah Dawabsha in al-Marj area in Douma village, southeast of Nablus. They wrote a statement on a wall near one of the burnt car saying: “A present from ‘Yits’har’ settlement to Arabs.” An eyewitness, Ameen Dawabsha, saw the settlers running away towards the nearby Allon Street.

Following the Friday prayer on 09 December 2011, dozens of Palestinian civilians and Israeli and international human rights defenders gathered in the center of al-Nabi Saleh village, northwest of Ramallah, to start the weekly peaceful protest against the construction of the annexation wall and settlement activities. The protesters walked towards the gate erected by Israeli forces near the entrance of the village and leading to Palestinian lands that Israeli settlers from the nearby ‘Halamish’ settlement are trying to seize. Israeli soldiers who had been extensively deployed in the area and near all the entrances of the village since the morning, began to confront the protesters who wanted to walk towards the affected lands. Israeli soldiers fired rubber-coated bullets, sound bombs and tear gas canisters at the protesters. A result, Mustafa Abdul Razzaq al-Tamimi, 27, was hit by a tear gas canister to the right side of his face. Al-Tamimi fell down and he was evacuated in a Palestinian taxi which drove towards Ramallah. Israeli forces stopped the taxi, took al-Tamimi, and transferred him to a hospital in Israel. At approximately 10:00 on Saturday, 10 December 2011, medical sources at Israeli hospital pronounced al-Tamimi dead. Al-Tamimi’s body was transferred to Ramallah Public Hospital at around 19:00 on Saturday, 10 December. Eyewitnesses told a PCHR fieldworker that the tear gas canister was fired at al-Tamimi from an Israeli military jeep that was located approximately 10 meters from him. Additionally, another 4 protesters, including two children, were wounded. They ranged in age from 15 – 50.

Also following the Friday Prayer on 09 December 2011, dozens of Palestinian civilians and international and Israeli human rights defenders organized a peaceful demonstration in Bil’ein village, west of Ramallah, in protest to the construction of the annexation wall and support for efforts to achieve national reconciliation between Hamas and Fatah movements. They raised the Palestinian flag and called for ending political division. They then moved towards areas of Palestinian land, which the Israeli High Court ordered to be returned to their Palestinian owners. Israeli soldiers stationed in the area fired rubber-coated metal bullets, sound bombs and tear gas canisters at the demonstrators. They also targeted the press car of Associated Press. As a result, a number of demonstrators suffered from tear gas inhalation.

Also following the Friday Prayer on 09 December 2011, dozens of Palestinian civilians and international and human rights defenders organized a peaceful demonstration in Ne’lin village, west of Ramallah, in protest against the construction of the annexation wall. They clashed with Israeli troops positioned near the annexation wall. Israeli soldiers fired rubber-coated metal bullets, sound bombs and tear gas canisters at demonstrators. As a result, a number of demonstrators suffered from tear gas inhalation.

Also following the Friday Prayer on Friday, 09 December 2011, dozens of Palestinian civilians and international human rights defenders organized a peaceful demonstration in the center of Kufor Qaddoum village, northeast of Qalqilya, in protest to continued closure of the eastern entrance of the village. They moved towards the entrance, but Israeli forces stopped them. Israeli soldiers fired tear gas canisters and sound bombs at the demonstrators. As a result, Ahmed Shaker Eshtaiwi, 21, was hit by a tear gas canister to the right shoulder, and a number of demonstrators suffered from tear gas inhalation.

At approximately 11:05 on Tuesday, 13 December 2011, Israeli soldiers stationed on observation towers at Beit Hanoun (Erez) crossing in the northern Gaza Strip fired at a number of Palestinian civilians and international solidarity activists who demonstrated in the east of Beit Hanoun town. According to Saber al-Za’anin, Coordinator of the Local Initiative in Beit Hanoun, at approximately 10:30 on Tuesday, about 30 demonstrators, including a number of international solidarity activists, gathered in front of the Agricultural School in Beit Hanoun. They moved towards the border between the Gaza Strip and Israel to protest to the establishment of a buffer zone by Israeli forces along the border. When the demonstrators got as close as to 100 meters from the border, Israeli forces fired them. The demonstrators left the area and no casualties were reported.

Due to the number and severity of Israeli human rights violations this week, the PCHR made several recommendations to the international community. Among these were a recommendation that the international community recognize the Gaza disengagement plan, which was implemented in September 2005, for what it is – not an end to occupation but a compounding of the occupation and the humanitarian crisis in the Gaza Strip.

In recognition of the ICRC as the guardian of the Fourth Geneva Convention, PCHR calls upon the ICRC to increase its staff and activities in the OPT, including the facilitation of family visitations to Palestinian prisoners in Israeli jails.