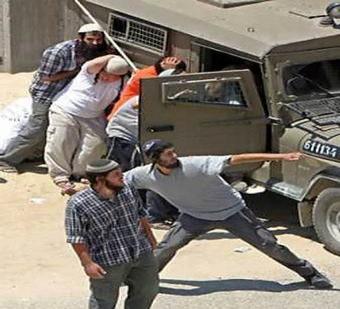 As extremist settler groups in the occupied West Bank step up their attacks against the Palestinians, their property and their holy sites, in addition to attacking Israeli peace groups and even Israeli soldiers and policemen, Israeli soldiers said that the problem they face in the West Bank is with Jewish fanatics, not the Palestinians.Israeli daily, Haaretz, quoted an army officer, who was discharged from the military last year, stating that “while the army is tasked with protecting the settlers, extremist settlers are actually the ones who are causing their problems.”

He further stated that the orders soldiers receive from their commanders are different from what takes place in real life.

On Thursday, Haaretz published a report stating that Israeli Prime Minister, Benjamin Netanyahu, recently issued instructions on how to deal with Jews who attack the army, and that such orders are different when dealing with field incidents.

Another soldier, who served in Hebron nearly three months ago, said that he and his fellow soldiers discussed issues on how to deal with possible clashes with the Palestinians, but when the soldiers dismantled the illegal Mitzpeh Eshtamoa outpost, they did not know how to deal with the issue, especially when Palestinians and settlers had a standoff because the settlers wanted to occupy a land used for grazing.

The soldiers, according to Haaretz, said that some fifteen settlers were swearing at them, and that the chief commander of the unit told the soldiers that “this is what usually happens,” adding that the settlers will even punctured the tires of his car.

Another soldier stated that most of the clashes that take place between Israeli soldiers and settlers happen on roadblocks, especially when the settlers just speed through them, and some of them even harass the soldiers and humiliate them.

There have been several incidents of violent clashes between Israeli soldiers and settlers, especially during the evacuation of some illegal outposts. Such clashes led to injuries and property damage.

The settlers are also attacking offices and vehicles that belong to leftist Israelis and peace groups such as Israel’s Peace Now Movement.

The settlers recently escalated their attacks, burnt Palestinian property, and even torched a number of mosques.

The attacks are carried out under the “Price Tag” policy as the settlers blame the Palestinians for any evacuation of illegal settlement outposts in the occupied territories. They also blame Peace Now and similar organizations for the evacuation of these outposts.