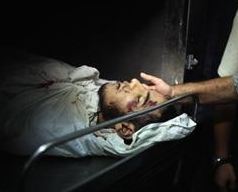 Israeli soldiers shot and killed, on Saturday at dawn, a Palestinian man in Al Boreij Refugee camp, in central Gaza, medical sources reported.The sources stated that Majed An-Nabaheen, 35, died of his wounds at the Al Aqsa Hospital, in Dir Al Balah, after succumbing to serious injuries.

Family members of An-Nabaheen stated that he was standing near his home before Israeli soldiers, stationed near the eastern part of the refugee camp, fired two shells and dozens of rounds of live ammunition. One of the bullets hit the man inflicting a serious injury that led to his death.

The Palestinian Center for Human Rights (PCHR), based in Gaza, stated in its weekly report for the week of December 08 to 14 – 2011, that four Palestinians (two fighters, a man and his child) were killed during Israeli Air Strikes targeting the Gaza Strip. One nonviolent protesters was killed in Nabi Saleh village, northwest of Ramallah. 23 Palestinians were injured by Israeli fire and shells during the same timeframe.