Obama assures Jewish Conference: US support for Israel is ‘unshakeable’ 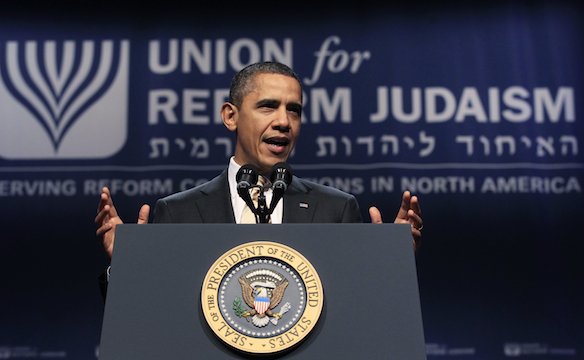 In a speech given to the Conference of Reform Jews in the US on Friday, President Barack Obama assured the audience that his administration was doing more than any previous administration in US history to serve the cause of Israel, and that US support for the Jewish state is ‘unshakeable’.President Obama made the speech in the global context of increased isolation of Israel due to its ongoing violations of the human rights of the Palestinian people, lack of compliance with its obligations as an Occupying Power under international law, and disregard for past signed agreements with the Palestinians which forbid the expansion of settlements in the West Bank and call for withdrawal of Israeli troops.

Just prior to giving the speech at the conference, President Obama met with Israeli Defense Minister Ehud Barak. The two did not discuss the recent upsurge in Israeli settler violence against Palestinians and against Christian and Muslim holy sites. According to a spokesperson for Obama, the two discussed ‘regional security’.

In his speech to the conference audience of several thousand Reform Jews, Obama stated, ‘It’s hard to remember a time when the [U.S.] administration gave more support to the security of Israel. Don’t let anyone to tell you otherwise. It’s a fact.’

Some political pundits have claimed that President Obama, in this talk, has launched his campaign for the Jewish vote for his re-election in 2012. Jews make up around 2% of the US population.

In a debate last week, all of the Republican candidates for President reiterated their strong support for Israel and Israeli policies.

President Obama also said in his talk Friday, ‘We stand with Israel as a Jewish and democratic state. America’s commitment and my commitment to the security of Israel is unshakeable.’

He did not address the issue of a contradiction between a state defining itself as both a theocracy (Jewish state) and a democracy. He stated that peace between Israel and the Palestinians could not come from outside, but would have to be negotiated between the Israelis and the Palestinians themselves. But the US President made no mention of the US military and financial aid provided each year to Israel – an aid package larger than any other US aid package in the world, which Palestinian leaders say is a major hindrance to peace negotiations, as it shows extreme US favoritism toward one side in the conflict.