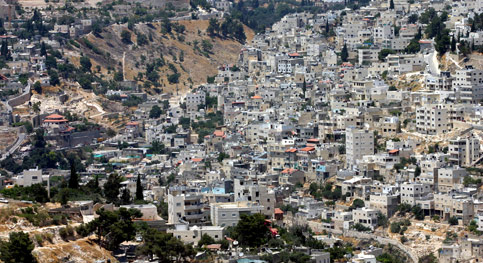 Just one week after two Palestinian homes were destroyed by Israeli troops in the Silwan neighborhood of East Jerusalem, rendering 15 people homeless, another two families in Silwan neighborhood received a temporary reprieve from the threatened demolition of their homes.Dozens of homes have been demolished by Israeli forces or commandeered by Israeli settlers in the last year, to make way for a planned biblical tourist park to be constructed by the Israeli government as part of the published ‘E1 Jerusalem’ plan.

In the recent court rulings, in two separate but related cases, Jerusalem judges ruled against groups associated with the Israeli settler group Elad, which had filed lawsuits to demand the eviction of the two families in order to move Jewish settlers into the homes.

Elad is a right-wing Israeli settler organization whose stated aim is to remove the Palestinian residents of the east Jerusalem neighborhood of Silwan, and move Jewish residents into the neighborhood. The group has supporters in the Israeli Knesset (Parliament), some of whom introduced a bill this spring to give the group full jurisdiction and oversight over the Silwan neighborhood. The group has also led tours partially funded by the Israeli army showing Israeli soldiers around the neighborhood and promoting their agenda.

Mohammed Dahleh, a lawyer who represented the two families, told reporters with the Israeli daily Ha’aretz, ‘Elad and its chief are doing their best, and using all methods possible to Judaize Silwan. Only the steadfastness of the local inhabitants and their supporters, and a public and judicial struggle, can stop the explosive situation from deteriorating only a few yards from [the Al-Aqsa mosque].’

In one of the cases, the plaintiffs claimed that the Karin family had sold their ancestral family home to Lowell Investment Corporation, a company associated with Elad that is registered in the south Pacific Cocos Islands, which are known to be a tax haven for multinational corporations seeking to hide assets. As evidence, however, they presented no paperwork or deed, but only an audio cassette tape of what they claimed was an elderly member of the Karin family saying that the home had been sold.

The judge ruled that the tape did not prove ownership, and the family could remain in their home.

In the other case, that of the Faraj family, Elad chairman David Be’eri claimed that the Yad Yaffe foundation, associated with Elad, had purchased the property, and argued that the Faraj family should be evicted. The judge rejected testimony by Be’eri, saying that Be’eri had “ignored facts that he was naturally aware of.’

These two rulings are unusual, in that most lawsuits filed against the residents of Silwan have ended with forced evictions of the Palestinian families involved. Hundreds of Palestinians have been rendered homeless by the demolition of their homes, or forced evictions by the Israeli government in the neighborhood.