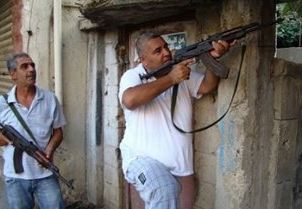 Following the first wave of armed clashes on Sunday in Ein al-Hilweh refugee camp, Lebanon, following the assassination of a Fateh leader, clashes took place again between Fateh gunmen and members of a group calling itself “Jund ash-Sham”.Amer Fostoq, a companion to Mahmoud Issa, head of the Armed Struggle of Fateh in the camp, was hit by several rounds of live ammunition and died of his injuries at a medical center in Saida.

One woman was also killed in the attack, and several other civilians were wounded.

Sources within the Fateh movement reported that seven Fateh supporters were wounded during the clashes, while approximately seven members of Jund ash-Sham were also injured.

After the deadly shooting, a firefight took place between Fateh and Jund Ash-Sham fighters in al-Fouqani Street, in the refugee camp.

The situation remains volatile, while dozens of families fled the camp towards the city of Said, fearing for their lives.

The Follow-up Committee of the Palestinian factions in Lebanon held a meeting in an attempt to control the situation and restore calm.

Meanwhile, the Lebanese Army took several measures around the refugee camp in an effort to contain the situation and prevent the clashes from spreading into other areas.