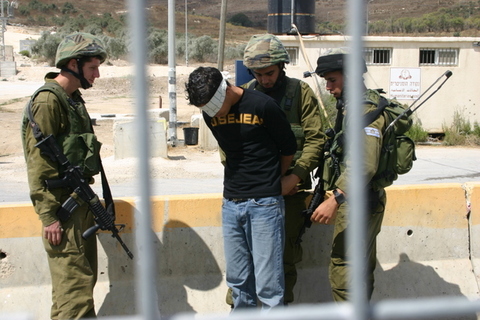 Eight Palestinians were arrested in pre dawn raids during a large scale incursion by the Israeli military on Thursday in the Jenin Refugee Camp. Over 30 arrests have been made in the camp in the last month.The Jenin Refugee Camp has recently suffered a higher number of arrests than usual. Over thirty arrests have been made in the past month. Last night
at least eight new arrests were made during a major Israeli military invasion of the refugee camp.

Among the people arrested were three members of The Freedom Theatre, a cultural centre for children and youth, including Mohammed Saadi; the theatre’s light and sound technician, who has subsequently been released.

‘At around midnight soldiers broke down the door to my house,” Saadi said. “They didn’t even knock. They blindfolded me and my brother and took us up to the mountain behind Jenin camp. There we were shoved into an army jeep. During the approximately half-hour drive to the army base we were constantly abused, physically and [verbally]. The soldiers hit us with their fists and the butts of their machine guns. In the early morning we were released after having been interrogated throughout the night.’

The reason for these arrests remains unclear.

To bring attention to Israel’s systematic practice of military rule and arbitrary arrests, The Freedom Theatre held a street performance at 2p.m. on December 21st near the groups studio in Jenin Refugee Camp.

In the event, Playback Theatre, members of the theatre group staged re-enactments of the arrests and detentions of Palestinians by the Israeli military.