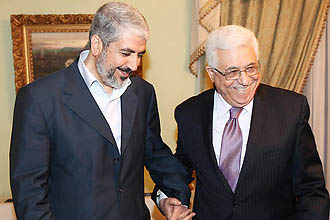 The new temporary Panel of the PLO includes all secretary-generals of the Palestinian factions, all members of the Executive Committee of the PLO, head of the National Council, and a number of independent figures.

Head of the Palestinian National Initiative, Dr. Mustafa Barghouthi, stated that this is a historic achievement, adding that “for the first time, there will be a unified leadership that includes all Palestinian factions”.

Also, president Abbas held a three-hour meeting with Khaled Mashal, head of the Political Bureau of the Hamas movement.

Hamas spokesperson, Ismail Radwan, stated that the meeting discussed the mechanisms that would be implemented in order to implement all articles of the National Unity Agreement, and end internal divisions.

Prior to his meeting with the leaders of the Palestinian factions, Abbas held a meeting with the head of the Higher Council of the Egyptian Army, Mohammad Hussein Tantawi; several Egyptian political and security leaders also attended the meeting.

Egypt played an important role in mediating between Fateh and Hamas movements, and sponsored the Reconciliation Agreement that was reached on April 27 this year.