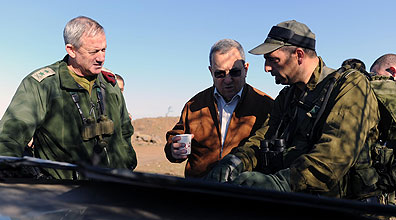 Israeli sources reported Thursday that the Israel government voided a $141 Million defense contract with Turkey fearing that the aerial defense systems that Tel Aviv sold to Ankara would “fall in the hands of Israel’s enemies, and be used against it”. The agreement was signed between the two countries three years ago.Israel daily, Haaretz, reported that the Defense Ministry announced in recent days that it intends to stop the deal that includes providing Turkey with surveillance equipment manufactured by the Elbit Systems, an Israeli electronic defense company.

Elbit systems said it would seek compensation from the Israeli Military establishment.

Israeli Yedioth Aharonoth stated that the decision to nix the deal due to fears that these systems would fall in the hands of Iran, and other “hostile countries”.

The Turkish-Israeli relations deteriorated after Israeli commandos attacked the Turkish MV Marmara Ship, that was heading to Gaza to deliver humanitarian supplies and break the blockade, part of the Freedom Flotilla.

The incident was carried out on May 31, 2010, and led to the death of nine Turkish activists; dozens of solidarity activists and several Israeli soldiers were injured, before the army controlled the ship and towed it to the Ashdod Port.

A number of Israeli officials denied on Thursday that the flotilla attack has anything to do with voiding the deal, and claimed that the decision was made due to security concerns.

Turkey also faces a loss of ties to France, whose Parliament have voted to send a bill to the French senate demanding the criminalizing of the denying genocide, including the 1915 mass killing of Armenians by Ottoman Turks. Ankara has since recalled their ambassador for ‘consultation’ and cancelled all economic, political, and military meetings.