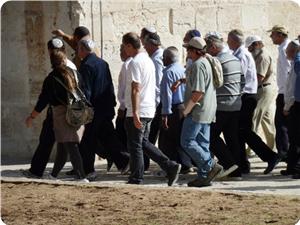 A group of Israeli settlers entered that Al Aqsa Mosque on Thursday, in occupied East Jerusalem, under the protection of dozens of Israeli soldiers. The settlers were marking the “Hanukkah” Jewish feast; no clashes were reported.The Palestine News Network (PNN) reported that head of the Islamic Waqf Department,Sheikh Azzam Al-Khatib, told its reporter that approximately 120 settlers entered the mosque under the guise of an Israeli “foreign tourism program”.

Al-Khatib stated that no clashes were reported between the Muslim worshipers at the mosque and the settlers.

PNN stated that Al-Khatib said that he is “sorry that the settlers chose to mark their feast in such a manner”.

He added that the Waqf department rejects such programs conducted by the Israeli Tourism Ministry as they lead to provocation.