Abbas In Bethlehem: “We Believe In Peace, We Seek Peace And Justice” 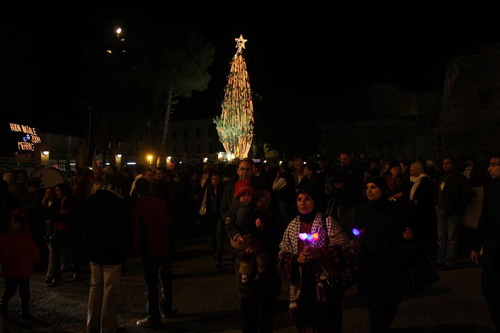 During his participation in Christmas celebrations in the birthplace of Jesus Christ, Bethlehem, Palestinian President, Mahmoud Abbas, stated that the Palestinian leadership works for peace, and will never abandon its path, adding that peace is a vital interest for the Palestinian people, the Israeli people, the Arab world and the entire world.Abbas said that he hopes Israel’s leaders will be able to realize that peace is in their best interest, instead of just placing obstacles that are blocking all efforts to resume a meaningful peace process that would lead to a just, and a comprehensive peace agreement.

“I want to wish you a Merry Christmas, I hope and pray to God that the Christians, and the entire world, will mark Christmas next year in a world filled with peace, love and stability,’ Abbas said, “I hope that next year will be the year when peace prevails in the Palestinian holy land, and the world.’

The president added the Palestinians managed to raise their flag at the UNESCO headquarters after achieving membership status, “and now, we are conducting all needed efforts to raise our Palestinian flag at the United Nations, we tried and we will keep trying”, he said.

“The Israelis must realize, must trust, that we are willing to engage in compressive peace talks with them, Israel claims we left peace talks, and initiated unilateral moves,’ Abbas added, “We seek peace- when we headed to the UN, we went to complain about Israeli violations, to make the world realize that settlement activities, and ongoing attacks, cannot continue side by side with peace talks.’

He further stated that Israeli settlers are escalating their attacks against the residents and the holy sites, adding that such attacks cannot be tolerated.
“They are burning trees, beating up our people, they are burning mosques,’ Abbas said, “This cannot be tolerated, so far, the settlers torched five mosques, this is immoral and must be stopped.’

The Palestinian president also stated that the three faiths always coexisted in this land; “Nobody is denying the right of anybody else, we want to live with them in peace, we want to establish our state next to their state, we believe in the two-state solution, living side by side in peace, I hope they will come back to their senses and realize that we seek peace, we want to live with them in peace, should they fail to realize this fact, then we will both lose, and we will both continue to suffer.’

Several Palestinian factions, including the Islamic Resistance Movement, Hamas, sent their wishes to the Christians in Palestine and around the World, and stated that the Palestinian people will never abandon their legitimate rights to liberty and independence in their land.