Fayyad: “No Peace Without Jerusalem” 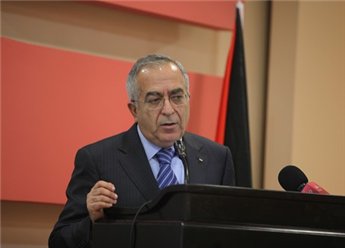 Palestinian Prime Minister, Dr. Salaam Fayyad, slammed the Israeli cabinet for its deliberations on passing a law that declares Jerusalem as the capital of the Jewish people, and said that no government, or person, has the right to determine the future of occupied East Jerusalem, the Maan News Agency reported.His statements came as he signed an agreement for economic cooperation between the Jordanian and Palestinian intuitions for encouraging investments between the two countries.

The ceremony was held in the central West Bank city of Ramallah during the opening session of a workshop between the Jordanian and the Palestinian private sectors. Several representatives, and officials, of both private sectors attended.

“The Palestinian right in Jerusalem is not negotiable, guaranteed by International Law and all international legitimacy resolutions,’ Fayyad said, “The Israeli government and the Knesset, or any other political body, do not have the right to discuss the issue.’

The Palestinian Prime Minister further said that there can never be any political solution without Jerusalem, adding that Israel and the international community must realize and recognize the Palestinian rights in Jerusalem.

He also stated that the Palestinian people are building strong institutions, building the infrastructure of the future state, especially in areas directly and heavily impacted by Israel’s illegal settlements, the Annexation Wall and areas that are repeatedly invaded and attacked by the army and the settlers.

Fayyad said that the private sector in Palestine, and despite the suffering and the ongoing occupation, has managed to boost the Palestinian steadfastness.

He added that the Palestinian authority is acting on reducing dependency of foreign aid, in order to achieve self-reliance and strong economic relations with neighboring countries, such as Jordan, and international countries.

He stated that the Palestinian Authority is working on activating higher committees that would work on organizing and strengthening economic cooperation between Jordan and Palestine, an issue that would boost the economy of the two countries, and would create a better environment to support the private sectors.

Fayyad called on the visiting Jordanian officials to visit different facilities, and interact with Palestinian businessmen and businesswomen to have a more clear idea about the possibilities of investment and cooperation.

He also stated that it is important to invest in occupied East Jerusalem, the Gaza Strip and the West Bank, in order to boost the economy and affirm the Palestinian right to liberation and an independent state with Jerusalem as its capital.