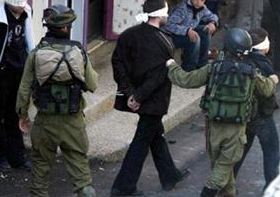 Former detainee and Palestinian researcher specializing in detainees’ affairs, Abdul-Nasser Farawna, stated that Israeli soldiers arrested 3,312 Palestinians, including children, since the beginning of this year. He said that the army conducted an average of 276 arrests each month, nearly nine arrests a day.

Farawna stated that the army detained men, women and children, and even went on to take patients and people with special needs. This is besides arrests targeting elected Palestinian political officials and legislators.

In a report published on December 19, the Ad-Dameer Prisoner Support and Human Rights Association stated that since October 18, 2011, when Israeli soldier, Gilad Shalit, was released in exchange for 477 detainees in the first stage of the swap-deal, Israeli soldiers abducted nearly 470 Palestinians, seventy of whom were children.

It said that in the first 15 days of December, the army kidnapped more than 21 youth, including 11 children, from the Shu’fat refugee camp, in occupied East Jerusalem.