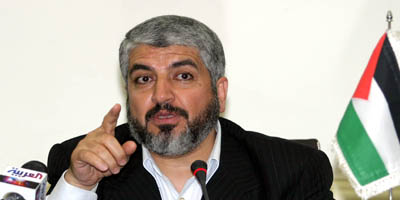 Head of the Political Bureau of the Hamas movement, Khaled Mashal, stated that the Hamas movement supports the Syrian President, Bashar Assad, “As he supported the Palestinian resistance and the Palestinian people in every possible way,’ according to Mashal, the Milad News Agency reported.The Hamas official said that Hamas “Respects and supports the Syrian President and the Syrian People,’ and that Hamas believes in ‘democracy, reform and the rights of the peoples,’ adding that Hamas rejects any solution that is based on shedding the blood of the people.

He further stated that the strategy of the Hamas movement is based on not interfering in internal politics of other nations.

“We never interfere in issues related to internal politics of other nations,’ Mashal said, “We advise the nations to conduct reforms, implement freedoms and democracy.’

Mashal acknowledged that the stance of Hamas regarding the Syrian regime “might not be welcomed by others,’ and said that “We find it enough to obey our God, and clear our conscious.’

He further confirmed that the leadership of Hamas is still based in Syria, and that he personally travels to Damascus despite the fact that some Hamas leaders left the country “due to social issues, or due to the requirements of their jobs.’

The Syrian revolution started on March 17 this year, demanding an end to the rule of Assad and his regime; thousands of Syrians have been killed and wounded after being fired at, and even bombarded by the army of Assad; dozens of soldiers and figures have now defected from the regime and expressed support to the revolution. The revolution is still ongoing with no foreseeable solution.