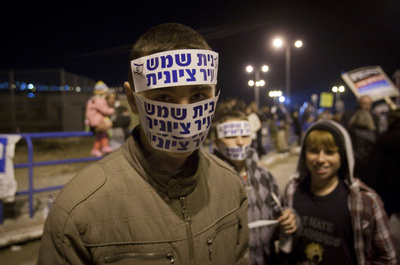 Thousands of local residents gathered in the Israeli village of Beit Shemesh, protesting the radically changing demographic of their city by the ultra-Orthodox community. The group seem hell-bent on enforcing their values on the secular and moderately religious majority, by attacking immodestly dressed school girls, and attempting to enforce gender segregation in the public sphere. The modern city Beit Shemesh, founded in 1950, was initially a largely secular village which epitomised a ‘development town’ on the road between Tel Aviv and Jerusalem. In the nineties, new orthodox Haredi neighbourhoods were built, vastly increasing the size of the city (which currently stands at around 100,000) and straining the relationship between the religious and secular communities.

The moderate orthodox and secular neighbourhoods currently make up around sixty-five percent of the city, which is changing rapidly due to the higher birth rate of Haredi Jews, and the rapid migration and take over of the city. Out of 30,000 future housing units, an estimated 2,000 are ear-marked for moderate or secular families.

Na’ama Margolese, an eight year old girl, shocked the people of Israel after a documentary showing her daily plight of walking to school was released. Haredi men were seen to spit and shout profanities towards her.

“When I walk to school in the morning I used to get a tummy ache because I was so scared … that they were going to stand and start yelling and spitting,” she says softly in an interview with Associated Press on Monday, adding that “They were scary. They don’t want us to go to the school.”

Margolese attends a new religious school, Orot Banot, which lies on the ‘border’ between an ultra-Orthodox neighbourhood and a modern orthodox area, and despite her dress being the national uniform for Israel’s religious schools, she is dress too immodestly for many of the Haredi men there.

Other students claim that the extremists consider the school an encroachment on their territory, and dozens of black-hat wearing men arrive almost daily to jeer and physically accost the young girls. An incident occurred recently where a woman was attacked whilst helping girls onto the school bus; her crime was being dressed too immodestly.

Margolese is credited with striking up massive protests by the secular (and even some Orthodox) residents of Beit Shemesh, with a large gathering occurring on Tuesday evening. Shimon Peres, the Israeli President, urged people to attend the protest, stating that “The demonstration today is a test for the people and not just the police. All of us….must defend the image of the state of Israel from a minority that is destroying national solidarity and expressing itself in an infuriating way.”

The abuse and segregation of women in ultra-orthodox communities is not a recent phenomenon, and the government have constantly been accused of turning a blind eye, particularly since Israeli Prime Minister Benyamin Netanyahu has formed a coalition government, with two such ultra-Orthodox groups providing key members in his administration.

Signs were previously erected, demanding that men and women use separate pavements, which have only just been removed by the police, who were harassed and called ‘Nazis’ by the jeering Haredi men. Modesty patrols have also been sent out, to harass and enforce a chaste appearance for women. Journalists who have visited the city have been attacked in several incidents, with many being pelted with eggs and even stones.

The ultra-Orthodox Jews only comprise ten percent of Israel’s total population, but has the growth-rate of around six percent, several times that of secular Israeli Jews. Unfortunately, they have become increasingly aggressive in attempting to impose their way on others, with hundreds of segregated buses still running illegally every day, and a rising influx of Jewish extremists into the Israeli Defence Force. Last week, an Israeli woman caused uproar when she refused to move to the back of the bus, when asked to do so by a religious man.

In Beit Shemesh, parents have been forced to take turns escorting their children to school in order to protect them, and they too have faced continuing harassment. But not all members of the Orthodox community are happy about the situation, with one woman who covers her hair and wears long sleeves and skirts, stating that “It shouldn’t matter what I look like. Someone should be allowed to walk around in sleeveless shirts and pants and not be harassed.”

Amongst the protesters was Asher Gold, Chairman of the ultra-Orthodox Students Association, who claimed that he was there to represent the Haredi public, “Most of whom are opposed to these extremists.”

Many residents blame the Mayor, Moshe Abutbul, who they claim has ignored their complaints about attacks against women for years. Tzion Sultan, a local social activist, believes that the mayor wishes to make secular and moderately religious residents leave the city, as thousands have done so over the past few years. The mayor held a press conference on Tuesday, and stated that “I will continue to serve, as long as the public wants me here.”

Na’ama Margolese may have to continue undergoing her almost daily torment and ordeal, but she has become a focal point on the front line of Israel’s latest religious war. Her public showing of the suffering many girls like her undergo has helped to spark the residents of Beit Shemesh, who have risen up, and appear to be declaring that they will not lose their city without a fight.