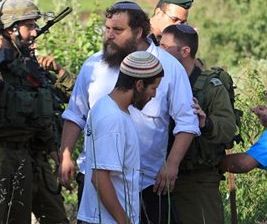 Armed Israeli settlers, in civilian clothes, were seen helping Israeli soldiers in searching Palestinian vehicles and checking ID numbers of Palestinians at a number of military roadblocks leading to the Ramallah district, in the central West Bank.The Maan News Agency reported that dozens of settlers in civilian clothes, carrying automatic rifles, stood next to the Israeli soldiers at the Bet El Roadblock, north east of Ramallah, and even searched Palestinian vehicles and examined the ID cards of the passengers.

Israel settlers usually conduct “patrols” on several roads in the occupied West Bank, but are always accompanied by Israeli soldiers.

This is the first time that some of the settlers actually participate in tasks that are the sole responsibility of the army.

This is happening amidst Israeli reports of the threats some extremist settler groups are posing not only on the Palestinian population, but also on Israeli soldiers.

Settlers even attacked and wounded several Israeli soldiers during the evacuation of some random illegal outposts that were dismantled by the army in the West Bank.

It is worth mentioning that the settlers also stepped-up their attacks against the Palestinian population, and their property and even torched several mosques and churches in the occupied West Bank and in the 1948 territories. Approximately three weeks ago, the settlers even attacked an Israeli military base.