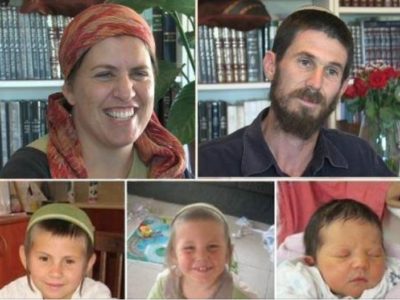 A Palestinian teen charged with the murder of nearly an entire Israeli family, including a baby, in the illegal settlement of Itamar in March 2011 , was sentenced on Monday to five life terms in Israeli prison camps.Amjad Awad, a 19-year old student, confessed to the murders after he was swept up in raids of his village, Awarta, following the attack. Awad claims he was also subjected to ‘harsh interrogation’ tactics for several days, and his cousin, Hakim Awad, was charged in the attack sentenced in September to five life terms plus five years.

Speaking to reporters in May, Awad claimed that “I don’t regret what I did, and would do it again.” He added, “I’m proud of what I did and I’ll accept any punishment I get, even death, because I did it all for Palestine.”

Israeli authorities abducted dozens of young men from the villages around the settlement following the gruesome attack on the family last March, and used various interrogation techniques to attempt to extract a confession from the boys and men they had abducted.

Palestinian officials condemned the attack on the family of settlers, and stated unequivocally that attacks on Israeli civilians are never acceptable in the struggle for Palestinian national liberation.

Local officials from Awarta asked Israeli authorities to look into the possibility that the attack may have been carried out by an Israeli with criminal intent, or by Thai guest workers who had complained of not receiving payment for work. These leads were never wholly investigated by Israeli authorities, and mainly local Palestinians were questioned in connection with the crime.

The killing of the parents Ehud and Ruth Fogel, along with their three children, Yoav, 11, Elad, 4, and Hadas, three months old, was the most brutal attack on Israeli settlers since 2002.

The two cousins, along with many members of their family, have ties to the Popular Front for the Liberation of Palestine (PFLP). After an extensive investigation the Israeli secuirty forces found no link between the attack and the PFLP, and concluded that the two cousins planned and carried out their attack independently of their affiliate group.

The murder of the Fogel family in Itamar received extensive media coverage worldwide, particularly in the U.S. The head of the organization If Americans Knew, which conducts media analysis of U.S. media coverage of the Israel-Palestine conflict, wrote in an article following the attack: “American media, in stark contrast to coverage of the Itamar victims, rarely report on Palestinian victims and their weeping families, or provide details of their grisly deaths.”

They also pointed out that media analysis by the organization found that American “Primetime network news shows report on Israeli children’s deaths at rates up to 14 times greater than they report on Palestinian children’s deaths; regional newspapers report Israeli deaths at even more disproportionate rates.”