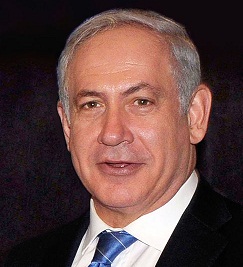 Israeli Prime Minister, Benjamin Netanyahu, told the visiting United Nations Secretary-General, Ban Ki-moon, that Israel will continue the construction of settlements, and that any chances for a construction freeze would only be possible through direct peace negotiations.Netanyahu said that Israel will not agree to a settlement freeze as a “precondition for the resumption of peace talks.’

His statements came during a press conference held on Wednesday afternoon with Ban Ki-moon after the two leaders concluded their meeting.

The Israeli Prime Minister said that “Halting settlement activities is not the core of the conflict,’ and claimed that the “Arabs attacked Israel and the Jews who lived in the country fifty years before the first settlement was ever built in the West Bank.’

He said that settlements are among the consequences of the conflict, and not its cause, adding that “Israel will be willing to find a solution for this issue through direct talks.’

Netanyahu reiterated his demands and preconditions that the Palestinians and the Arab nations must recognize Israel as a state for the Jewish people.

On his part, Ban urged Israel to halt its settlement activities and stated that he informed Netanyahu that settlement construction does not help advance the peace process, and that Tel Aviv must cease the constructions.

Israel’s settlements in the occupied territories are illegal under International Law and the Fourth Geneva Convention.

The Palestinians quit talks with Israel due to its illegal settlement activities, ongoing attacks, and the demolition and takeover of Palestinian and Arab homes in occupied East Jerusalem, the anticipated capital of the future Palestinian State.

Earlier on Wednesday, the U.N. Sec. General held talks with Israel’s President, Shimon Peres, and stated that the Iranian issue must be resolved using nonviolent means. He also stated that he is concerned that Iran might be developing nuclear weapons.