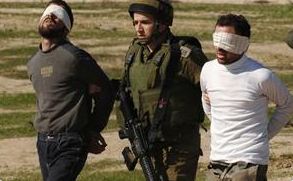 Israeli soldiers arrested more than 320 Palestinians in numerous parts of the West Bank, the Gaza Strip, and occupied East Jerusalem during the month of January, a Palestinian researcher stated.Researcher Riyadh Al-Ashqar, specialized in detainees’ affairs, stated in his report that four elected legislators, 53 children, eight women, and one former detainee, were among the kidnapped in January.

He added that Israel re-arrested the four elected legislators, including the head of the Legislative Council, Dr. Aziz Dweik, and imprisoned them under Administrative Detention orders.

The Israeli army went into the Red Cross office in Sheikh Jarrah, in occupied East Jerusalem, and took Legislator Mohammad Totah, and former Minister, Khaled Abu Arafa. They have been camped and in hiding at the Red Cross Center for more than eighteen months to protest Israeli orders exiling them from the city.

Twenty-seven legislators, and three ministers, are currently imprisoned by Israel.