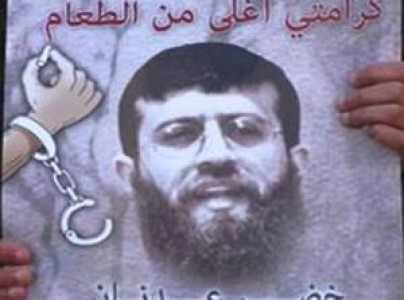 Ten more Palestinian detainees at the Ofer Israeli prison, decided to join the open-ended hunger strike of Sheikh Khader Adnan, who has been on hunger strike for 50 days, and his health condition has sharply deteriorated. Amjad An-Najjar, head of the Palestinian Prisoner Society (PPS), in the southern West Bank city of Hebron, stated that six Islamic Jihad detainees, and four detainees of the Popular Front for the Liberation of Palestine (PFLP), declared they are joining the strike.

An-Najjar stated that Adnan, 33, is ongoing with his strike despite his bad health condition, and held Israel responsible for his life.

The Palestinian Prisoner Society (PPS) reported on Tuesday evening that detainee Khader Adnan was moved to a hospital near Bnei Brak, after a sharp deterioration in his health after 47 days of hunger striking.

Earlier on Tuesday, Khader, who is the head of the Islamic Jihad movement in the West Bank, stated that he will be stepping-up his strike by refraining from taking any liquids.

The Israeli Prison Administration (IPA) informed him that if he refuses to drink liquids it will have to administer them medically. Khader then agreed to drink water and take a potassium pill.

The detainee has a court session scheduled for Wednesday. The PPS said it will be closely following his case through his attorney.

He was sent to court on Monday, and the prosecution demanded that he remains imprisoned under administrative detention, without charges. The court decided to delay its ruling in the case until Wednesday.