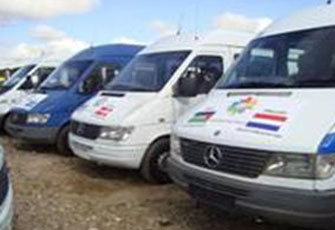 Palestinian sources reported Monday that the “Miles Of Smiles 9” aid and solidarity convoy made it into the coastal region through the Rafah Border Terminal, between Gaza and Egypt.Convoy Coordinator, Isam Yousef, stated that 64 solidarity activist from Bahrain, Tunisia, Jordan, Britain, South Africa and Egypt, crossed into the coastal region carrying medical supplies and equipment estimated at $2.7 Million, including a number of ambulances and power generators for hospitals.

The Miles of Smiles 8 convoy managed to enter Gaza on January 14 this year, carrying 48 human rights activists, two tons of medical sullies, in addition to 120 scooters for the physically challenged.

Medical supplies and equipment are still urgently needed in Gaza Strip hospitals and medical facilities, despite Israeli claims of easing the siege and allowing aid through.

Due to Israel’s blockade, imposed in 2007, many of the urgently needed supplies have been lacking in the Gaza Strip, leading to the preventable deaths of over 400 patients in the last five years.

In addition, patients in Gaza are prevented from leaving the Strip by Israeli authorities, who require a special permit for medical treatment abroad which is rarely granted.