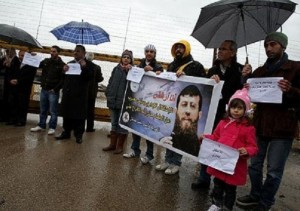 Lawyer of the ad-Dameer Prisoner Support and Human Rights Association, Samer Samaan, was granted access to the ailing hunger-striking detainee, Khader Adnan, who has been on hunger strike for 51 days, despite the sharp deterioration in his health condition. Khader is currently at an Israeli Hospital in Safad.Ad-Dameer stated that the Israeli Prison Administration has been moving Khader from one hospital to the other, without actually providing him with the urgently needed medical care.

It held Israel responsible for the life of Khader, and demanded that the Prison Administration release him immediately, without any preconditions.

Samaan stated that Khader insists on remaining on his hunger strike, and continues to refuse vitamins and salts despite his deteriorating condition.

It is worth noting that the Israeli Military Court has not made a decision yet whether to renew the administrative detention order against Khader or not.

He is one of nearly three hundred Palestinians being held in Israeli detention camps without charge, in what the Israelis call ‘administrative detention’ – the terms for these detentions are six months, at which point the Israeli officials decide whether to release the prisoner or detain him or her for an additional six months.

These extensions can go on for years – the longest administrative detainee has been held for more than eight years – and are in violation of the Fourth Geneva Convention which prohibits the indefinite detention of prisoners without charges.