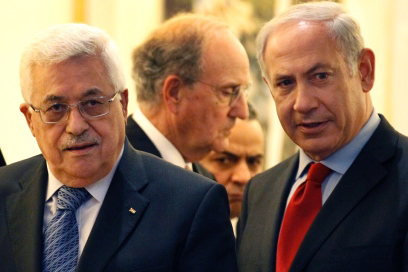 Israeli Prime Minister Benjamin Netanyahu slammed Palestinian President Mahmoud Abbas over the reconciliation agreement, singed on Monday at the Qatari Capital of Doha. The deal between Fateh and Hamas head, Khaled Mashaal, states that Abbas would become the Prime Minister of the Unity Government until new elections are held.During a meeting with his Likud, a right-wing party, Netanyahu stated that “Abbas must choose between peace with Israel or coalition with the Hamas movement,’ Israeli Haaretz reported.

Netanyahu claimed that Israel “conducted extensive efforts to advance the peace process,’ and added that “should Abbas implement the agreement that was signed in Doha, he will be departing the path of peace to join Hamas that ignores the International Community.’

The Doha agreement is considered a major advancement in unity talks between Hamas and Fateh, and if implemented, could mean the actual implementation of Palestinian national unity, resolving the issue of the post of the Prime Minister, which had previously been a major source of contention.

Palestinian media sources reported that Fayyad and Ismail Haniyya of Hamas will likely be serving deputies to Abbas, as Haniyya will be running the affairs of the Gaza Strip while Fayyad will be responsible for West Bank affairs.

The government is intended to be one consisting of technocrats, and will have several major tasks, headed by the reconstruction of the Gaza Strip and preparing for the new presidential and legislative elections.

Israel and the United States believe that any agreement with Hamas is a deviation from the stalled peace process, and another “setback”.

Netanyahu’s statements regarding international law come despite the fact that Israel’s occupation of Palestine is a direct violation to international law, and disregards Israel’s settlements in the occupied West Bank, including in occupied East Jerusalem, which violates the Fourth Geneva Convention to which Israel is a signatory.