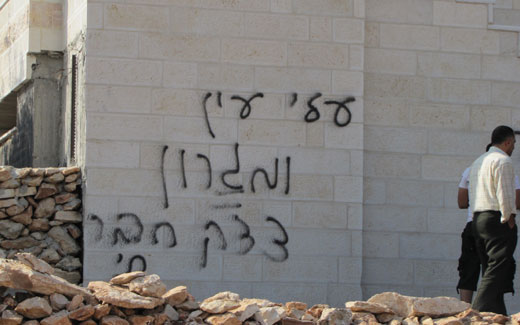 Israeli daily, Haaretz, reported Friday that an Israeli soldier and two young female settlers were arrested by the Israeli Police for writing anti-Arab, Anti-Islam graffiti in the Al-Lubban Ash-Sharqiyya Palestinian village, south of the northern West Bank city of Nablus. The three were arrested on Thursday at night; the soldier is a resident of the Itamar illegal settlement, near Nablus.

The soldier and two young female setters were caught on tape by a surveillance camera infiltrating into the Palestinian village last Tuesday at 1:30 A.M.

He drove a car into the village and one of the female settlers stepped-up and used a knife to cut open some cement sacks.

Later on, the three sprayed graffiti including “Death to Arabs”, Mohammad is a pig”, and “Price Tag” in the village.

Dozens of residents in the village, woke up on the sound of the settlers’ vehicle driving in their village, and tried to intercept the car; an argument took place and the soldier used his automatic rifle to scare the residents away; the three settlers then drove out of the village.

The District Court in Jerusalem decided to remand the soldier under interrogation until Monday; he admitted to the vandalism act, while the two young women, Orien Nizri, from Jerusalem, and Sarah Goldberg from Tapuach illegal settlement, will remain in detention, until Tuesday, pending further legal action.

Price Tag attacks carried out by extremist settlers, including Israeli soldiers who are also settlers, are continuously being carried out against the Palestinians, their property, their orchards and farmlands, and against holy sites; such attacks included burning several mosques and a church.

These attacks also targeted offices and property that belong to leftist Israeli groups, including offices and property of members of the Israeli Peace Now Movement.
The settlers blame Israeli peace groups, and the Palestinians for any evacuation of illegal settlement outposts in the occupied territories.