US Students campaign for release of nonviolent activist Fadi Quran 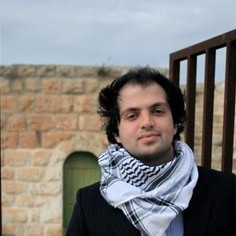 After Israeli forces pepper sprayed and abducted US citizen and non-violent activist Fadi Quran on Friday, a group of students at Quran’s alma mater Stanford University have spearheaded a campaign for his release.The students organized an online petition that garnered 1,000 signatures in its first day, and have received messages of support from a number of academics, including renowned scholar Noam Chomsky, calling for Quran’s release.

Fadi Quran was involved in a non-violent march in the southern West Bank City of Hebron on Friday, organized by Youth Against Settlements. Israeli troops attacked the protesters with tear gas and rubber-coated steel bullets, and also pepper sprayed a number of protesters at close range.

Quran was one of those who was pepper sprayed directly in the eyes. He was then pushed to the ground by Israeli soldiers, hitting his head on the bumper of an Israeli military transport vehicle and passing out briefly on the ground. A video of the protest shows Quran briefly regaining consciousness and calling for an ambulance, saying he couldn’t breathe.

Instead he was handcuffed and put into the back of an Israeli military vehicle, which took him to the Ofer military prison. At a hearing on Monday, Quran appeared to have recovered from his injuries. A military prosecutor presented secret evidence to the judge, who remanded the 24-year old non-violent activist back to Ofer prison on unspecified charges. His lawyer was told that he will receive a second hearing on Tuesday.