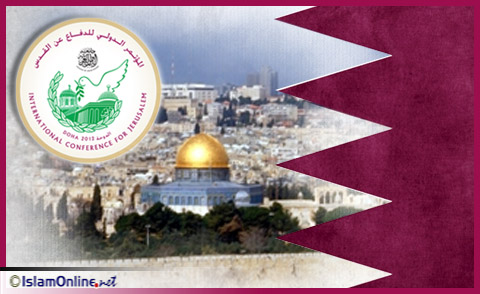 The Al-Quds Conference, held in Doha – Qatar, concluded its deliberations on Monday with a decision to head to the United Nations over the ongoing Israeli violations and escalation against the Arab and Islamic Holy Sites in occupied East Jerusalem.The will also be asking the UN to investigate all Israeli measures taken in East Jerusalem since it fell under occupation following the 1967 six-day war when Israel occupied the rest of Palestine (the West Bank, the Gaza Strip and East Jerusalem).

The Arab leaders who participated in the conference stated that the Palestinians in occupied Jerusalem must be supported by political, financial, development and media means in order to be able to counter the Israeli aggression against them.

The also called on Switzerland, the depository of the of the Fourth Geneva Convention of 1949, to wich Israel is a signatory, to urge all countries that sponsored the agreement to convene, and to act of on halting the Israeli violations.

The leaders said that they are extremely concerned regarding the Israeli excavations under the Al-Aqsa Mosque in occupied East Jerusalem, and in other areas in the occupied city.