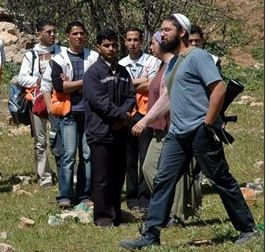 Palestinian sources reported that dozens of armed Israeli settlers attacked, on Monday evening, a home in Burin village, near the northern West Bank city of Nablus, and chopped several olive trees.The settlers attacked the home of Um Sufan, located close to Yitzhar settlement, and hurled stones and empty bottles at it; damage was reported, no injuries. The settlers then proceeded to cut some olive trees around the house before heading back to their settlement.

Um Sufan told the Maan News Agency that the settlers ran away after dozens of youth from the village rushed to her house forcing the settlers away; no clashes were reported.

Ghassan Douglas, in charge of the settlement file in the northern part of the West Bank, told Maan that the situation is still fragile as settlers of Bracha illegal outpost attacked the residents and their property in the eastern part of the village.

Settler attacks in the occupied West Bank, including in occupied East Jerusalem, are seriously escalation as they fall part of what the settlers call “Price Tag” as they blame the Palestinians for any outpost that is evacuated by the Israeli military.

The settlers also blame Israeli peace groups and leftists organization, and even carried out attacks against their offices and vehicles.